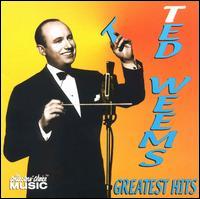 Born in Pitcairn, Pennsylvania, Weems learned to play the violin and trombone. He attended the University of Pennsylvania, where he and his brother Art organized a small dance band. Going professional in 1923, Weems toured for the MCA Corporation, recording for Victor Records. Somebody Stole My Gal became the band's first #1 hit in early 1924.

Weems was a Victor band from 1923 through 1933, although the final 3 sessions were released on Victor's recently started-up Bluebird label. He then signed with Columbia for 2 sessions in 1934 and subsequently signed with Decca from 1936.

Weems moved to Chicago with his band around 1928. The Ted Weems Orchestra had more chart success in 1929 with the novelty song "Piccolo Pete", and the #1 hit The Man from the South.

The band gained popularity in the 1930s, making regular radio broadcasts. These included Jack Benny's Canada Dry program on NBC during the early 1930s, and the Fibber McGee & Molly program in the late 1930s. In 1936, the Ted Weems Orchestra gave singer Perry Como his first national exposure; Como recorded with the band (on Decca Records), beginning his long and successful career. Among Weems' other discoveries were whistler-singer Elmo Tanner, sax player and singer Red Ingle, Marilyn Maxwell, who left the band for an acting career, and arranger Joe Haymes, who created the band's unique jazz-novelty style. The first season of the Beat the Band radio show (1940-1941) included Weems and his orchestra as part of the cast.[1] Edith Law sang with Ted Weems and his orchestra on WJZ five nights a week, 15 minutes per. She was the first woman singer to have her own show circa 1930's.

During World War II, Ted Weems enlisted in the United States Merchant Marine, directing the Merchant Marine Band. Reorganizing his big band in 1947, he made records for Mercury, including the hits Peg O' My Heart and Mickey. However, the biggest hit of Weems' career was a reissue on his former Victor label: the Weems Orchestra's 1933 recording of Heartaches topped the national charts for 13 weeks. Decca Records also seized the moment, and its reissue of I Wonder Who's Kissing Her Now with vocals by Perry Como became another major chart hit.

Despite this sudden surfeit of popularity, the hits dried up after 1947. Weems toured until 1953. At that time he accepted a disc jockey position in Memphis, Tennessee, later moving on to a management position with the Holiday Inn hotel chain.

This article uses material from the article Ted Weems from the free encyclopedia Wikipedia and it is licensed under the GNU Free Documentation License.