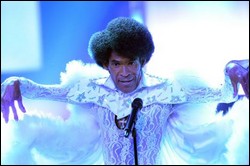 Roberto "Bobby" Alfonso Farrell (6 October 1949 30 December 2010) was a Dutch dancer and performer from Aruba, best known as the male member of the successful 1970s pop and disco group Boney M.[1]

Farrell was born and raised on the island of Aruba in the Lesser Antilles, where he lived until the age of 15. After finishing school he worked as a sailor for 2 years, travelling across the oceans before settling in Norway. From Norway, he went to the Netherlands, where he found occasional work as a DJ before finding better opportunities in Germany.

In Germany, he worked mostly as a DJ until producer Frank Farian spotted him for his new Boney M. group. He became the sole male singer in the group, although Farian later revealed that Bobby made almost no vocal contributions to the group's records, with Farian himself performing the male parts on the songs in the studio. Liz Mitchell claimed that only she, Marcia Barrett and Farian had sung on the hit recordings. Farrell did, however, perform live in some of the various incarnations of 'Boney M', including the main 1970s incarnation.[2] Farrell left the group in 1981, after clashes with Farian. He was replaced by Reggie Tsiboe. He re-joined in 1984, and continued as a member until it finally split in 1986.[3]

Farrell's daughter Zanillya Farrell claims that Farian deprived Farrell of his rights over Boney M.'s hits, which caused her father to lose all his income after the band split.

When Dad asked Farian for 100,000 marks he was told to sign some ­papers. He signed away ­everything ­image rights, ­royalties, the lot. My father lost ­everything. We had to move in with my ­grandmother in the Netherlands and live on welfare. After that, Dad started getting angry a lot. But Mum was very smart and realised if you own the name you can use it. Farian had not ­registered Boney M all over the world. So thats why Dad could ­perform in certain countries.[4]

He subsequently toured with his own group performing the band's hits under the name "Bobby Farrell's Boney M.". He also appeared as a dancer in late 2005 in the Roger Sanchez video clip of Turn on the Music.

Farrell lived for many years in Amsterdam, in the neighbourhood of Gaasperdam in the borough of Amsterdam-Zuidoost.

He died on the morning of 30 December 2010, in a hotel in Saint Petersburg, of heart failure.[5] His agent John Seine said Farrell was complaining of breathing problems after performing with his band the evening before.[6][7] Farrell's body was reportedly discovered by hotel staff after he failed to respond to an alarm call.[8] He was buried at Zorgvlied cemetery.

Very soon after his death was reported, it was observed to have occurred on the anniversary of, and in the same city as, the death of Rasputin, described in Boney M's eponymous hit single, in a case of life imitating art;[9] Farrell had also dressed up as Rasputin in some band performances of the song.[10][11]

His daughter Zanillya Farrell is a rapper. In December 2011, she won the national music prize Grote Prijs van Nederland in the hip hop category. [12]

All of these releases contain re-recordings of Boney M.'s hits - not the original versions.

This article uses material from the article Bobby Farrell from the free encyclopedia Wikipedia and it is licensed under the GNU Free Documentation License.