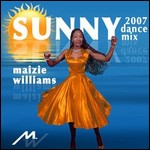 Maizie Ursula Williams (born March 25, 1951, Montserrat, West Indies) is a West Indies-born British model and singer who became one of the original members of the successful 70s disco music group, Boney M. Though she did not sing on the studio-recordings of their songs, she did perform live and subsequently established an independent career as a singer.

Brought up in Birmingham, UK, Williams began working as a model, eventually gaining the title Miss Black Beautiful in a contest in 1973. After this initial success she went on to front her own band, Black Beautiful People. She later moved to West Germany with her friend Sheyla Bonnick. One day in 1975, while at a restaurant, the two were approached by an agent who asked if they were interested in joining a new pop group Boney M. "She asked if we could sing. Well, you don't say no, do you," Williams later recalled in an interview. She had previously been singing with a local band back in England but had been told off by her brother Billy: "You have a terrible voice. Better keep working as a walking clothes-hanger." [1]

It turned out that it was not important if Williams could sing or not, since the job was to dance and mime to a disco song called "Baby Do You Wanna Bump" that producer Frank Farian had recorded all the vocals for himself but was unable to promote himself since he had a career as a schlager singer in his own name. So Williams and Bonnick teamed up with a girl called Nathalie and a boy called Mike and did a discotheque tour and a few TV performances over the next months. Nathalie left and was replaced by Claudja Barry. Sheyla then decided that lip-syncing was not for her and left, hoping to achieve a solo career. Mike left as well, and the two were replaced by new members Marcia Barrett and Bobby Farrell.[2] When Claudja went the same way as Sheyla, Liz Mitchell took her place, and finally the pieces fell together: Boney M. were assembled as a real group and ready to do a follow-up to "Baby Do You Wanna Bump".

Both Liz Mitchell and Marcia Barrett were singers and would participate in the group's recordings together with producer Frank Farian who did the deep male voice. The threesome recorded the follow-up single "Daddy Cool" which soon became a worldwide hit and launched the group's phenomenal career, with numerous hit singles and albums over the next decade. Williams and Bobby Farrell did not sing on the records since "their voices weren't suited for this particular kind of music" as Farian put it in a Bravo interview in 1978. It did not create a scandal - both Williams and Farrell did sing during the group's many live performances during their extensive world tours 1977-1979. Williams remained with the group until the ultimate break-up in 1990. In 1994, she did what her former colleagues Liz Mitchell and Bobby Farrell had also done, she formed her own Boney M group, billed as Boney M featuring Maizie Williams. The group also featured Sheyla Bonnick from the short-lived original 1975 line-up. Williams herself would finally front as a lead singer in the group's renditions of the hits "Brown Girl in the Ring", "Hooray! Hooray! It's a Holi-Holiday", "Sunny" and "Daddy Cool".

It is stated on Williams' official site that "it's no secret that although she sang in the studio Williams' less dominant voice appears to have been mostly excluded from many of the recordings, with the exception of some backing vocals, for reasons only the producer knew at the time".[3] However, the inner sleeve of the group's Oceans of Fantasy LP, 1979, lists only Farian, Mitchell and Barrett in the track-by-track vocal credits.[4] Maizie did record a minor part for the group's "That's Boonoonoonoos / Train to Skaville" which was also broadcast in the 1981 TV special "Ein Sound geht um die Welt" (A Sound Goes Around the World),[5] but in the final mix released on record, the part was eventually re-recorded by Liz Mitchell.

The singer initiated a court case against Boney M.'s producer Frank Farian and Sony/BMG concerning her rights to perform under the name "Boney M". Farian was promoting Liz Mitchell's group as the authentic continuation of Boney M. The court heard that "she had not sung on any of the band's recordings".[6] On February 16, 2009, Williams had judgement in the case, that Farian has to account to her for pay on all record sales and future sales.

Besides still touring the world, Williams released her first solo record in December 2006, Call Upon Jesus, including the download single "Praise Be Unto Him". In February 2007, she released her own dance version of the Boney M. hit "Sunny". In June, she starred as the featured vocalist on Latvian group Melo-M's version of "Daddy Cool" which hit the #1 spot in the LMK charts in the last week of August.

In September 2011, a Dutch press release was issued regarding a tribute single that has been written by Williams, together with Dutch songwriters Eddie Middle-Line and Björn de Water. This will make it the first new release by two members of Boney M. in over 30 years. The song and video for "Josephine Baker" (Eddie Middle-Line Mix) had a worldwide release.[7]

This article uses material from the article Maizie Williams from the free encyclopedia Wikipedia and it is licensed under the GNU Free Documentation License.

Johannes Brahms Allegro non assai aus der Sinfonie Nr.4 Op.98, Bearbeitung für 2 Klaviere
Update Required To play the media you will need to either update your browser to a recent version or update your Flash plugin.