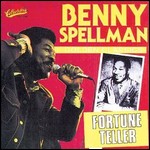 Benny Spellman (December 11, 1931 June 3, 2011)[1] was an American R&B singer,[2] best known for his 1962 hit "Lipstick Traces (On A Cigarette)," written by Allen Toussaint, and the original version of "Fortune Teller", covered by The Who and The Rolling Stones, among others.[3] "Lipstick Traces" reached #28 on the US Billboard Black singles chart and #80 on the Billboard Hot 100.[4] Spellman variously worked with Allen Toussaint, Earl King ("Trick Bag"), Huey "Piano" Smith, Ernie K-Doe, Wilson Pickett, The Neville Brothers and The O'Jays.[5]

Spellman was born in Pensacola, Florida, United States.[5] He sang backing vocals on Ernie K-Doe's number one hit record, "Mother in Law".[3] He recorded a single, "Word Game", on Atlantic Records in 1965, but later semi-retired from music to work in the beer industry.[3]

In 1988, Collectables Records issued a retrospective album of 16 of Spellman's recordings from the 1960s. In 2009, he was inducted into the Louisiana Music Hall of Fame.[5]

This article uses material from the article Benny Spellman from the free encyclopedia Wikipedia and it is licensed under the GNU Free Documentation License.