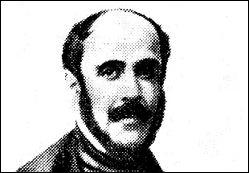 Giovanni Ruffini (1807, Genoa - 1881) was an Italian poet of the early 19th century. He is chiefly known for having written the draft of the libretto of the opera Don Pasquale for its composer Gaetano Donizetti.

Ruffini had been condemned to death as an enemy of the state and was living in exile in Paris in 1842 when it was suggested to him that he might offer his services to Donizetti as a librettist by Jules Janin (newly appointed director of Théâtre-Italien). Donizetti told him exactly what he required for his latest opera project, Don Pasquale, but not that he intended to re-use music already written for other purposes. Ruffini duly wrote the draft libretto from the original text dating back to 1810, but Donizetti changed so much from Ruffini's version that Ruffini became angry and refused to allow his name to be mentioned in the programme for the première at the Théâtre Italien in Paris 3 January 1843. Although Ruffini refused acknowledgement of his work for the libretto, Donizetti paid the librettist 500 francs, which was competitive to the length and genre at the time. Ruffini also reportedly enjoyed working with Donizetti in the early stages of their collaboration, though he wrote to family and friends that the composer continually pressed him to work faster.[1]

This article uses material from the article Giovanni Ruffini from the free encyclopedia Wikipedia and it is licensed under the GNU Free Documentation License.

Wolfgang Amadeus Mozart Molto allegro aus der Sinfonie Nr. 40 g-moll KV 550
Update Required To play the media you will need to either update your browser to a recent version or update your Flash plugin.