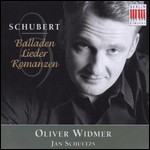 Oliver Widmer (born 24 March 1965) is a Swiss operatic bass-baritone whose international career has encompassed lieder, opera, and oratorio. In 1998 he created the role of Jäger in Heinz Holliger's opera Schneewittchen.[1]

Widmer was born in Zürich and studied first under his father, the baritone Kurt Widmer, at the City of Basel Music Academy. He made his debut as a recitalist in 1985 followed by further study under Dietrich Fischer-Dieskau at the Hochschule für Musik Berlin from 1986 to 1989. He has been a member of the Zurich Opera from the early 1990s.[2] Widmer is married to the mezzo-soprano Cecilia Bartoli.[3]

Widmer's recordings on CD and DVD include:

This article uses material from the article Oliver Widmer from the free encyclopedia Wikipedia and it is licensed under the GNU Free Documentation License.