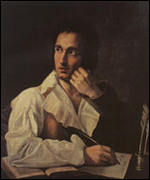 He is most famous for having supplied the libretti for two operas by Rossini and for five operas by Donizetti.

Another version of his name is Giacomo Ferretti, and it is also sometimes erroneously spelled "Jacobo Ferretti".

Introduced by his father to literature while very young, in addition to his native Italian, Ferretti mastered not only Latin and Ancient Greek but also French and English, and began writing verse early. Even though he worked in the tobacco industry from the age of about 30 until he was over 60, he was extremely prolific, writing "everything from love letter to odes and welcoming speeches",[1] and numerous opera libretti, all but the few listed below being generally forgotten.

His first big success was La Cenerentola, written at great speed for Rossini over Christmas in 1816. Ferretti wrote afterwards how he had agreed to write a libretto on a subject which the censor vetoed, so he met the composer and the theatre manager to discuss alternatives. He struggled to find a new subject that appealed, but about two dozen were rejected for one reason or another. At last, yawning wearily, Ferretti said "La Cenerentola" ("Cinderella") and at last Rossini decided he liked it, so Ferretti went home and began at once, worked night and day on it, and gave sections to Rossini on Christmas Day. Early on during the production there were problems, but Rossini predicted (correctly) that it would be a great success in the long term.

Ferretti married the singer Teresa Terziani, and their house was continually visited by musicians and poets, including Donizetti who was a good friend.

Operas with music by Gaetano Donizetti

Operas with music by Saverio Mercadante

Operas with music by Giovanni Pacini

Operas with music by Luigi Ricci

Operas with music by Lauro Rossi

Operas with music by Gioachino Rossini

Many others for other composers, now mainly forgotten.

This article uses material from the article Jacopo Ferretti from the free encyclopedia Wikipedia and it is licensed under the GNU Free Documentation License.

Antonio Vivaldi Concerto C-Dur für 2 Trompeten, Streicher und Basso continuo
Update Required To play the media you will need to either update your browser to a recent version or update your Flash plugin.