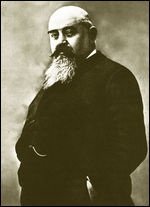 He gained initial fame for his play Una Partita a Scacchi ("A Game of Chess") in 1871. His main field was playwriting, which he accomplished with both insight and simplicity, using subjects set in Piedmont and themes addressing contemporary bourgeois values. He wrote La Dame de Challant for noted French actress Sarah Bernhardt, which she produced in New York in 1891.

He also wrote the librettos used by Giacomo Puccini in La bohème, Tosca and Madama Butterfly in conjunction with Luigi Illica.

This article uses material from the article Giuseppe Giacosa from the free encyclopedia Wikipedia and it is licensed under the GNU Free Documentation License.