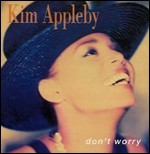 Kim Appleby (born 28 August 1961), is an English singer, songwriter and actor. She participated in the duo Mel and Kim, with her sister Melanie Appleby, until her sister's death from pneumonia following treatment for cancer.

Appleby was born in Stoke Newington[1] to a Jamaican father and English mother.[2] She grew up in Hackney where her childhood was spent in poverty, with her parents splitting when she was fifteen and she was a mother by the age of seventeen.[2] She attributed her maturity to becoming a mother, stating that she "grew up overnight" and that she "changed and became a better person because of it".[2] She found success at the age of 24 and enjoyed chart hits with her sister between 1986 and 1988, including a number one UK single with "Respectable", although they had stopped performing and recording in 1987 due to Mel's illness.[3][4] When her sister Mel was diagnosed with cancer, Kim took time out of her career to nurse her for two and a half years until her death in January 1990.[2]

She had a show on the European internet station Storm Live. She also acted in the movie Going Straight and in the soap opera, Doctors (on BBC One).

Appleby featured on two tracks on Tonka's 2004 album 84 ("Believe" and "Follow You"), and also featured on Levthand's 2010 album Taxidrive.

Appleby has chaired the Best Contemporary Song category of the Ivor Novello Awards since 2003.

In December 2010, the single "Took a Minute" by Levthand featuring Kim Appleby was released in Europe.

She worked with a string of different record producers such as Anders Bagge, Michael Garvin, Sheppard Solomon, and Terry Roland amongst others. The above list of unreleased songs are titles that have been registered on Ascap.com and Bmi.com under Kim Appleby songs.

Mike Stock stated that they also worked on two-three additional songs at the time they recorded "Free Spirit" in 1994.

This article uses material from the article Kim Appleby from the free encyclopedia Wikipedia and it is licensed under the GNU Free Documentation License.