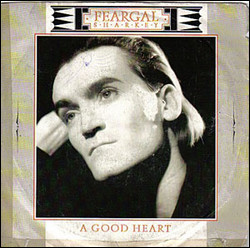 Seán Feargal Sharkey (born 13 August 1958) is a singer from Northern Ireland most widely known as the lead vocalist of pop punk band The Undertones in the 1970s and 1980s, and also for solo works in the 1980s and 1990s. His 1985 solo single "A Good Heart" was an international success. After becoming less musically active in the early 1990s, he has performed various roles supporting the UK's commercial music industry, winning several awards and honours for his work in that area.

Sharkey, who was born in Derry, Northern Ireland, joined The Undertones shortly after their formation in 1975.[1] They had several UK hits, with songs such as "Teenage Kicks", "Here Comes The Summer", "My Perfect Cousin", "Wednesday Week" and "It's Going to Happen!". The band split in 1983 citing musical differences, with Sharkey pursuing a solo career and other members of the band forming That Petrol Emotion the following year.

Before his solo career took off, he was also the singer of the one-shot group The Assembly with ex-Yazoo and Depeche Mode member Vince Clarke (pre-Erasure). In 1983 their single "Never Never" was a UK No. 4 hit.

Sharkey's debut single was a collaboration with Madness member Cathal Smyth titled "Listen to Your Father". The single was released on Madness's label Zarjazz Records in 1984, reaching No. 23 in the UK chart.[2] The track was performed on Top of the Pops with members of Madness.

Sharkey's solo work was significantly different from the post-punk offerings of The Undertones. His best-known solo material is the 1985 UK chart-topping single penned by Lone Justice frontwoman Maria McKee, "A Good Heart", which went to No. 1 in several countries including the UK in late 1985. He also had a UK Top 5 hit in 1986 with "You Little Thief". This song had a link with "A Good Heart": "You Little Thief" was written by Benmont Tench, the keyboardist for Tom Petty and the Heartbreakers, about his relationship with McKee in response to her writing "A Good Heart" about him. His eponymous debut album reached No. 12 in the UK Albums Chart.[2]

Following on from his second album Wish in 1988, he achieved further success in 1991 with his UK Top 30 album Songs From The Mardi Gras, which produced the No. 12 hit single "I've Got News for You".

Starting in the early 1990s Sharkey moved into the business side of the music industry, initially as A&R for Polydor Records, and then as managing director of EXP Ltd. He was appointed a member of the Radio Authority for five years from December 1998 to December 2003.

When the Undertones reunited in 1999, Sharkey was offered the opportunity to rejoin the group but turned down the offer.[3] As such, his position as lead vocalist/frontman for the Undertones was subsequently taken by fellow Derry native Paul McLoone, who is also a radio presenter for the Irish national and independent radio station, Today FM.

Sharkey became chairman of the UK Government task force the 'Live Music Forum' in 2004, to evaluate the impact of the Licensing Act 2003 on the performance of live music,[4] and gave public evidence before the Culture, Media and Sport Committee[5] on 11 November 2008.

In 2008, Sharkey was appointed as the CEO of British Music Rights, replacing Emma Pike.[6] In October 2008, he became head of UK Music,[7] an umbrella organisation representing the collective interests of the UK's commercial music industry. He has become prominent in criticising the use of Form 696 by the Metropolitan Police' requiring event promoters to provide data on performers and audiences.[8] Sharkey resigned from UK Music on 11 November 2011.[9]

Sharkey appeared on BBC Newcastle, interviewed by Simon Logan on the afternoon show on 7 August 2013. He spoke about his career and his decision to resign from the stage: "I've had an absolutely brilliant career... It's time to get off the stage and make room for [new artists]".

In 2004, Sharkey was awarded the "Scott Piering Award", by the radio industry for "recognising achievement in the promotion of music and the understanding of the music industry to their colleagues in radio". He is the only member of the Radio Authority to have been honoured in this way by the radio industry.[10]

In 2006 he got the "Bottle Award", at the International Live Music Conference for "outstanding contribution to the live music industry".[11]

In 2008, Sharkey was awarded an Honorary "Doctor of Arts", by the University of Hertfordshire in recognition of outstanding achievement in the field of music.[12]

In 2009 he entered The Guardian's MediaGuardian 100, described as the "MediaGuardian's annual guide to the most powerful people in television, radio, newspapers, magazines, digital media, media business, advertising, marketing and PR", at number 56.[13]

In 2010 he appeared in Wired's The Wired 100, "Who are the people who shape the Wired world," at number 45.[14] The same year he received a Doctor of Letters honoris causa from the University of Ulster in recognition of his services to music.[15]

This article uses material from the article Feargal Sharkey from the free encyclopedia Wikipedia and it is licensed under the GNU Free Documentation License.