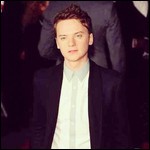 Conor Paul Maynard (born 21 November 1992) is an English singer from Brighton who is currently signed to EMI subsidiary, Parlophone.[1] Maynard rose to success in 2012 when he was nominated for, and subsequently won, MTV's Brand New for 2012 award.[2] His debut single, "Can't Say No", was released in the United Kingdom on 16 April 2012.[3]

On 20 May, 2006, Maynard signed up to online video-sharing website [YouTube] and uploaded his very first video of him singing "Breathe" by fellow British musician Lee Carr.[4] on 1 December 2008. Throughout 2009present, Maynard uploaded cover versions of songs with rapper and close friend, Anthony "Anth" Melo who resides in Virginia. Together they have covered a variety of songs, including: Chris Brown ("Crawl"), Taio Cruz ("Dynamite"), Rihanna ("Only Girl (In the World)"). Maynard was brought to label attention when American singer/songwriter Ne-Yo watched a cover version of his track "Beautiful Monster" who contacted the musician soon afterwards, and Ne-Yo became Maynard's mentor.[5]

Rey and Delilah makes MTV's Brand New for 2012 list|publisher=Digital Spy|date=2011-12-02}}</ref> It was announced on 31 January 2012 that Maynard had been crowned winner of the award, having received approximately 48% of the public vote.[2] February 2012 saw the reveal that Maynard had been signed to label EMI subsidiary, Parlophone in late 2011 and that work would begin in the coming months on his debut studio album, Contrast.[1] Maynard released the music video for his debut single "Can't Say No" on 1 March, 2012,[6] which by September 2012 had already surpassed fourteen million views. The single was met with positive reviews, with Lewis Corner (of Digital Spy) describing it as "playful, fun and immediately leaves you wanting another go",[7] whilst others compared Maynard to Canadian singer Justin Bieber; both vocally and career-wise. However Conor disputes this claim, saying "I'm not like Justin Bieber." but recognises that they both gained popularity from being young and from being found through YouTube.[8]

Maynard's debut single, "Can't Say No", was released in the United Kingdom on 15 April, 2012 debuting at number two on the UK Singles Chart for the week ending 28 April with 74,792 copies sold.[9] The track also saw chart success in Ireland and Scotland, where it peaked at number thirteen and number three respectively.[10][11] On 1 May, Maynard released the album track "Drowning" as a free download (instant great) for any fans who pre-ordered the upcoming studio album, Contrast.[12] On 5 May, he performed 'Can't Say No' at the 7th annual edition of the TRL Awards in Italy.[13] On June 9 2012, Maynard performed 'Can't Say No' at the Capital Summertime Ball[14] in front of a 80,000 strong crowd.

Maynard then released the third single from the album "Turn Around" which featured Ne-Yo, it peaked at number 8 on the UK singles chart.

This article uses material from the article Conor Maynard from the free encyclopedia Wikipedia and it is licensed under the GNU Free Documentation License.