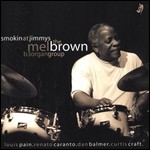 Mel Brown (born in 1944) is an American jazz drummer, and one of the most prominent jazz musicians in Portland, Oregon, United States since his arrival in 1973.[1]

Brown was employed as a session musician for many Motown Records artists in the late 1960s and early 1970s, including Martha and the Vandellas, Stevie Wonder, The Temptations, and Marvin Gaye.[2] It was not Motown's policy to print the names of the backing band members at the time, so he is not credited on the album notes for many of his recordings.

Brown came to Motown via Martha Reeves who hired him in 1967 to join her band, at comedian Redd Foxx's recommendation. Brown played for Reeves and the Vandellas for a couple of years (she gives him a shout out on her unreleased "Live at the Copa" album) before Motown hired him away as a studio musician and to travel with other Motown acts. Coming full circle, Reeves and Brown reunited in 2010 when Martha was booked at the Portland night club called, amazingly, "Jimmy Mak's."

Brown also recorded drums on the George Harrison song 'My Sweet Lord' released in 1970 on the album All Things Must Pass.[3][4]

Brown continues to play live with some of the Pacific Northwest's most prominent jazz, funk and soul musicians. He also organizes and teaches at a summer camp for jazz music at Western Oregon University.[5][6]

This article uses material from the article Mel Brown (drummer) from the free encyclopedia Wikipedia and it is licensed under the GNU Free Documentation License.

Johann Christian Cannabich 1. Satz aus der Sinfonie G-Dur
Update Required To play the media you will need to either update your browser to a recent version or update your Flash plugin.