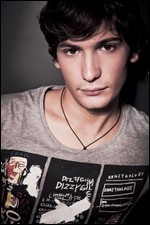 He was a contestant of the ninth edition of the Italian popular talent show Amici di Maria De Filippi; he reached the finals and finished in third place.[1] He also won the critics award.[2] He signed a contract with Sony Music Entertainment and during the final of the show he won the prize of journalistic criticism of the value of 50,000 euros. His debut album Una Canzone Pop peaking the #1 in the Italian album chart and has been certified double platinum in Italy.[3][4] Even his first single "Di Notte" reached #1 in Italy.[5] He is also the author of the song "Per tutte le volte che...", performed by Valerio Scanu, who won the Sanremo Festival 2010.[6][7] He also released the book I sogni fanno rima which was an editorial success.[8] On July, he released the second single from the album: Mi piaci...ma non troppo.[9]

On 29 October 2010 the single La prima volta was released. It was the lead single from his second album Distrattamente, released the following 23 November.[10][11] The album reached #13 in the Italian charts.[12] He wrote the song "Guardando Verso il Mare" for Matteo Macchioni (released in Macchioni's first album in 2011).[13] Pierdavide is currently touring Italy with his "Distrattamente Tour".[14] On July and August, Carone had opened several concerts of Franco Battiato. His single, "Volo a Rio" was released on 16 September 2011. The song was taken from the concept album dedicated to Rio, an 2011 animated film by 20th Century Fox and Blue Sky Studios.

This article uses material from the article Pierdavide Carone from the free encyclopedia Wikipedia and it is licensed under the GNU Free Documentation License.

Georg Friedrich Händel Ouvertüre zur Oper "Alessandro nell'Indie"
Update Required To play the media you will need to either update your browser to a recent version or update your Flash plugin.