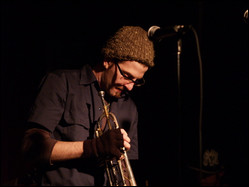 Avishai Cohen Is a New York City-based jazz musician originally from Tel Aviv, Israel. Cohen is an internationally recognized jazz trumpet player, composer, and bandleader. His playing style reflects a heavy influence from the bebop and post-bop traditions. However elements of avant-garde jazz, and jazz fusion, as well as other contemporary styles can be heard in Cohen's playing as well. Cohen attended the Berklee College of Music and began establishing himself within the jazz community after placing third in the prestigious Thelonious Monk Jazz Trumpet Competition.

Cohen was born in Tel Aviv, Israel. He grew up in a musical family with his saxophonist siblings: sister Anat Cohen and brother Yuval Cohen (soprano saxophone).[1] At the age of eight Avishai asked his mother if he could begin taking trumpet lessons.[1] Avishai and his siblings showed tremendous potential as young musicians. At age ten, Avishai began playing with the Rimon Big Band, He recalls "I had a box I stood on",[1] As a Teenager Avishai Toured with The Israeli Philharmonic Orchestra.[1]
Avishai attended the Berklee College of Music in Boston after receiving a full scholarship.[2] After graduating from Berklee, Cohen went on to win 3rd place in the prestigious Thelonious Monk jazz trumpet competition in 1997.[3] After winning the competition Cohen moved to New York City where he began developing his music alongside Jason Lindner and bassist Omer Avital at Smalls Jazz Club.[3] He recorded his first album in 2003 with Anzic Records. The album title The Trumpet Player is titled such to avoid confusion with a jazz bassist of the same name (Avishai Cohen).[4] Since then he has recorded with many notable jazz artists as a bandleader, co-leader, and composer. He has played with several important jazz groups that include several musicians from the SFJAZZ Collective.[4] He is married and has two children.[1]

Avishai has stated in a number of interviews that he was very heavily influenced by Miles Davis.[3]

Additionally he has mentioned the following musicians as part of a list of many more:

This article uses material from the article Avishai Cohen (trumpeter) from the free encyclopedia Wikipedia and it is licensed under the GNU Free Documentation License.