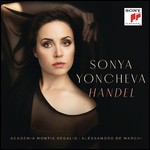 Born in Plovdiv, Bulgaria, Yoncheva did not have a conventional childhood. Since the age of 6, she was already "working", according to her own words from an interview for Metropolis.[1] She studied piano and voice at the National School for Music and Dance in Plovdiv. During her teenage years, she hosted a Bulgarian television show about music.[2] She won several music competitions in Bulgaria in 2000 and 2001, including a joint win with her brother as "Singers of the Year 2000" in the "Hit-1" competition organised and produced by Bulgarian National Television.

In 2009, she obtained her master's degree in classical singing from the Conservatoire de Musique de Genève, where her teachers included the opera singer Danielle Borst.[3]

Yoncheva was an invited participant in William Christie's "Jardin des Voix" academy for young singers in 2007.[4] She has continued work in the baroque repertoire with Christie, and also with Le Concert d'Astrée and Emmanuelle Haïm. Yoncheva was the female first-place winner of the 2010 Operalia competition.[5] Her debut at the Metropolitan Opera was in November 2013 when she stepped in as Gilda in Rigoletto, in advance of her previously scheduled official debut.[6] In 2014 at the Met, she sang her stage role debut as Mimì (La bohème) in November and shared the role of Violetta (La traviata) in December.[7] In 2015 she appeared as Desdemona in the season opening production of Otello the Metropolitan Opera.[8] and in September 2016 she made her debut as Norma at the Royal Opera House, where she sang Antonia in Les contes d'Hoffmann in October of the same year.[9] She made her role debut in the title role of Puccini's Tosca for the Metropolitan Opera for their 2017/18 season to great critical acclaim.[9][10] Other role debuts in the 2017/18 season include Verdi's Luisa Miller at the Metropolitan Opera, Élisabeth de Valois in Verdi's Don Carlos at the Paris Opera and Imogene in Vincenzo Bellini's Il pirata at the Teatro alla Scala.[9]

Yoncheva is featured on commercial recordings on the Virgin Classics label.[11] In November 2013, she signed a recording contract with Sony Classical.[4] She also appears in commercial DVD releases of Claudio Monteverdi's L'incoronazione di Poppea and Il ritorno d'Ulisse in patria, and of Giovanni Battista Pergolesi's Il Flaminio. Additionally, she is featured on Pergolesi's "Stabat Mater" and Mozart's "Le Nozze di Figaro" on Deutsche Grammophon.[12]

Yoncheva and her husband Domingo Hindoyan, a Venezuelan conductor, live in the canton of Vaud, Switzerland. The couple have a son, Mateo, born 6 October 2014.[2] Her younger brother Marin Yonchev is a rock singer.

This article uses material from the article Sonya Yoncheva from the free encyclopedia Wikipedia and it is licensed under the GNU Free Documentation License.

Alessandro Stradella Sinfonia für Trompete und Streicher D-Dur "Il Barcheggio"
Update Required To play the media you will need to either update your browser to a recent version or update your Flash plugin.