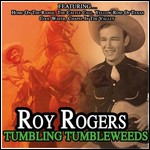 Roy Rogers, born Leonard Franklin Slye (November 5, 1911 July 6, 1998), was an American singer and cowboy actor, one of the most heavily marketed and merchandised stars of his era, as well as being the namesake of the Roy Rogers Restaurants franchised chain. He and his wife Dale Evans, his golden palomino, Trigger, and his German Shepherd dog, Bullet, were featured in more than 100 movies and The Roy Rogers Show. The show ran on radio for nine years before moving to television from 1951 through 1957. His productions usually featured a sidekick, often either Pat Brady (who drove a Jeep called "Nellybelle"), Andy Devine, or the crotchety George "Gabby" Hayes. Rogers's nickname was "King of the Cowboys" and Evans's nickname was "Queen of the West".

Slye was born to Andrew ("Andy") and Mattie (Womack) Slye in Cincinnati, Ohio, where his family lived in a tenement building on 2nd Street (Riverfront Stadium was constructed at this location in 1970 and Slye would later joke that he had been born at second base). Dissatisfied with his job and city life, Andy Slye and his brother Will built a 12-by-50-foot houseboat from salvage lumber, and, in July 1912, the Slye family traveled up the Ohio River towards Portsmouth, Ohio. Desiring a more stable existence in Portsmouth, the Slyes purchased land on which to build a home, but the Great Flood of 1913 allowed them to move the houseboat to their property and continue living in it on dry land.

In 1919, the Slyes purchased a farm in Duck Run, located near Lucasville, Ohio about 12 miles north of Portsmouth. There they built a six-room home. Slye's father soon realized that the farm alone would provide insufficient income for his family, so he took a job at a shoe factory in Portsmouth. He lived there during the week and returned home on the weekends, bearing gifts for the family following paydays. One notable gift was a horse on which Slye learned the basics of horsemanship.

After completing the eighth grade, Slye attended high school in McDermott, Ohio. When he was 17, his family returned to Cincinnati, where his father began work at another shoe factory. He soon decided on the necessity to help his family financially, so he quit high school, joined his father at the shoe factory, and began attending night school. After being ridiculed for falling asleep in class, however, he quit school and never returned.

Slye and his father felt imprisoned by their factory jobs. In 1929, his older sister, Mary, moved to Lawndale, California with her husband. Father and son decided to quit their shoe factory jobs. The family packed their 1923 Dodge for a visit with Mary and stayed four months before returning to Ohio. Almost immediately afterward, Slye had the opportunity to travel to California with Mary's father-in-law, and the rest of the family followed in the spring of 1930.

The Slyes rented a small house near Mary. Slye and his father immediately found employment as truck drivers for a highway construction project. They reported to work one morning, however, to learn their employer had gone bankrupt. The economic hardship of the Great Depression had followed them west, and the Slyes soon found themselves among the economic refugees traveling from job to job picking fruit and living in worker campsites (Leonard would later read John Steinbeck's The Grapes of Wrath and marvel at its accuracy). One day, Andy Slye was told of a shoe factory hiring in Los Angeles and asked Leonard to join him in applying there for work. Leonard, having seen the joy that his guitar and singing had brought to the destitute around the campfires, hesitantly told his father that he was going to pursue a living in music. With his father's blessing, he and cousin Stanley Slye went to Los Angeles and sought musical engagements as the Slye Brothers.

In 1932, a palomino colt was foaled in California named "Golden Cloud", and later renamed "Trigger" in 1938 after he was acquired by Len. Len then went on tour with the "O-Bar-O Cowboys" and in June 1933 met Grace Arline Wilkins at a Roswell, New Mexico radio station. She traded Len a lemon pie for his singing "Swiss Yodel" over the air. Then in 1934, having corresponded since their first meeting, Len and Grace Arline Wilkins were married in Roswell, New Mexico, on June 11, 1936.[1]

Rogers and Arline had a son, Roy Jr. ("Dusty") in 1946, but Arline died of complications from the birth a few days afterward on November 3. Rogers had met Dale Evans in 1944 when she was cast in a film with Rogers. Following Arline's death, Rogers and Evans soon fell in love, and Rogers proposed to her during a rodeo at Chicago Stadium. They married on New Year's Eve in 1947 at the Flying L Ranch in Davis, Oklahoma, where a few months earlier they had filmed Home in Oklahoma. Rogers and Evans remained married until Rogers's death in 1998.[1]

Slye moved to California to become a singer. After four years of little success, he formed the Sons of the Pioneers with Bob Nolan and Tim Spencer, a Western cowboy music group, in 1934. The group hit it big with songs like "Cool Water" and "Tumbling Tumbleweeds". From his first film appearance in 1935, he worked steadily in western films, including a large supporting role as a singing cowboy while still billed as "Leonard Slye" in a Gene Autry movie. In 1938, when Autry temporarily walked out on his movie contract, Slye was immediately rechristened "Roy Rogers". Slye's stage name was suggested by Republic Picture's staff after Will Rogers and the shortening of Leroy. and assigned the lead in Under Western Stars. Rogers became a matinee idol and American legend. A competitor for Gene Autry as the nation's favorite singing cowboy was suddenly born. In addition to his own movies, Rogers played a supporting role in the John Wayne classic Dark Command (1940). Rogers became a major box office attraction.

In the Motion Picture Herald Top Ten Money-Making Western Stars poll, Rogers was listed for 15 consecutive years from 1939 to 1954, holding first place from 1943 to 1954.[2] He appeared in the similar Box Office poll from 1938 to 1955, holding first place from 1943 to 1952. (In the final three years of that poll he was second only to Randolph Scott.) [3] Although these two polls are really an indication only of the popularity of series stars, Rogers also appeared in the Top Ten Money Makers Poll of all films in 1945 and 1946.[4]

Rogers was an idol for many children through his films and television shows. Most of his postwar films were in Trucolor during an era when almost all other B westerns were black-and-white. Some of his movies would segue into animal adventures, in which Rogers's horse Trigger would go off on his own for a while, with the camera following him.

With money from not only Rogers' films but his own public appearances going to Republic Pictures, Rogers brought a clause into a 1940 contract with the studio where he would have the right to his likeness, voice and name for merchandising.[5] There were Roy Rogers action figures, cowboy adventure novels, and playsets, as well as a comic strip, a long-lived Dell Comics comic book series (Roy Rogers Comics) written by Gaylord Du Bois, and a variety of marketing successes. Roy Rogers was second only to Walt Disney in the amount of items featuring his name.[6] The Sons of the Pioneers continued their popularity, and they have never stopped performing from the time Rogers started the group, replacing members as they retired or passed away (all original members are deceased). Although Rogers was no longer an active member, they often appeared as Rogers' backup group in films, radio, and television, and Rogers would occasionally appear with them in performances up until his death. In August 1950, Evans and Rogers had a daughter, Robin Elizabeth, who had Down Syndrome and died of complications with mumps shortly before her second birthday. Evans wrote about losing their daughter in her book Angel Unaware.

Rogers and Evans were also well known as advocates for adoption and as founders and operators of children's charities. They adopted several children. Both were outspoken Christians. In Apple Valley, California, where they made their home, numerous streets and highways as well as civic buildings have been named after them in recognition of their efforts on behalf of homeless and handicapped children. Rogers was an active Freemason and a Shriner, and was noted for his support of their charities.

Rogers and Evans's famous theme song, "Happy Trails", was written by Evans; they sang it as a duet to sign off their television show. In the fall of 1962, the couple co-hosted a comedy-western-variety program, The Roy Rogers and Dale Evans Show, aired on ABC. It was cancelled after three months, losing in the ratings to The Jackie Gleason Show on CBS. He also made numerous cameo or guest appearances on other popular television shows, starring as himself or other cowboy-type characters, such as in an episode of Wonder Woman called "The Bushwackers".[7] Rogers also owned a Hollywood production company which handled his own series. It also filmed other undertakings, including the 1955-1956 CBS western series Brave Eagle starring Keith Larsen as a young peaceful Cheyenne chief, Kim Winona as Morning Star, his romantic interest, and the Hopi Indian Anthony Numkena as Keena, Brave Eagle's foster son.

In 1968, Rogers licensed his name to the Marriott corporation, which converted its Hot Shoppes locations to Roy Rogers Restaurants, with which Rogers otherwise had no involvement.

When Rogers died of congestive heart failure on July 6, 1998, he was residing in Apple Valley, California. He was interred at Sunset Hills Cemetery[9] in Apple Valley, as was his wife, Dale Evans, three years later.[10]

Rogers was mentioned in the Lyle Lovett single "If I Had A Boat", Elton John's 1973 album "Goodbye Yellow Brick Road" contained the escapist ballad "Roy Rogers", and Toby Keith's "Should've Been A Cowboy".

Roy Rogers and Dale Evans are mentioned in the song "Lets Ride Into The Sunset Together" performed by the Lost Weekend Western Swing Band. This song appears in the video gameFallout: New Vegas.

Roy Rogers himself makes an appearance in the music video for the song "Heroes and Friends" by Randy Travis.

This article uses material from the article Roy Rogers from the free encyclopedia Wikipedia and it is licensed under the GNU Free Documentation License.