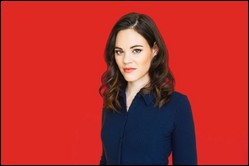 Mühlemann was born in Adligenswil, and studied voice with Barbara Locher at the Academy of Music in Lucerne in 2010 where she graduated with honors with a Master of Arts.[1] Her first appearances on the opera stage included the following roles: Maturina in Gazzaniga's Don Giovanni Tenorio, Barbarina in Le nozze di Figaro, Papagena in The Magic Flute, and Doralice in Scarlatti's Il trionfo dell'onore.

In Jens Neubert's film version of Weber's opera Der Freischütz, Mühlemann played the role of Annie and was praised by critics. The Neue Zürcher Zeitung saw her as "a discovery of the first order." [2] In the opera season 2010 and 2011, Mühlemann appeared at the Lucerne Theatre as soloist in several operas, such as Mozart's "The Magic Flute" and Alessandro Scarlatti's "Il trionfo dell'onore."[3]

This article uses material from the article Regula Mühlemann from the free encyclopedia Wikipedia and it is licensed under the GNU Free Documentation License.

Frédéric Chopin Etude Ges-Dur op. 10 Nr. 5
Update Required To play the media you will need to either update your browser to a recent version or update your Flash plugin.