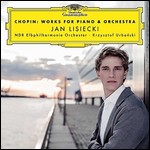 Jan Miłosz Lisiecki (born March 23, 1995) is a Canadian classical pianist of Polish descent. In addition to performing in live concerts, he has been a recording artist with Deutsche Grammophon since 2010.

Lisiecki was born in Calgary, Alberta, Canada to Polish parents. He began studying piano at the age of five. Lisiecki had his orchestral debut at the age of 9, and has since performed with orchestras in Canada and internationally, including the New York Philharmonic, Orchestre de Paris, BBC Symphony Orchestra, Rotterdam Philharmonic Orchestra, National Arts Centre Orchestra, Montreal Symphony Orchestra, to name a few. Lisiecki has performed with conductors Claudio Abbado, David Zinman, Paavo Järvi, Antonio Pappano, and Yannick Nézet-Séguin. On January 1, 2010 Lisiecki opened the Chopin 200th Birthday celebrations from the composer’s birthplace, Żelazowa Wola. The same month, he performed Chopin Concerto No. 1 in E minor at the MIDEM Classical Awards Gala in Cannes, France. Lisiecki performed for Queen Elizabeth II and 100,000 people on Parliament Hill in Ottawa, Ontario, Canada, as part of the Canada Day 2011 celebrations.

In 2008, Lisiecki performed the Chopin F minor Concerto and was named the sensation of the prestigious festival “Chopin and His Europe” in Poland. In 2009, he returned to Warsaw, performing the Chopin E minor Concerto. Lisiecki's debut CD, featuring these two live performances, with Sinfonia Varsovia and Howard Shelley, was released in early 2010 by the Fryderyk Chopin Institute. The CD was awarded the prestigious Diapason d’Or Découverte award in May 2010. The Diapason magazine describes Lisiecki as “an unmannered virtuoso already with virile, and above all, irresistibly natural playing.” BBC Music Magazine’s July 2010 review commended "Lisiecki's mature musicality,” and his “sensitively distilled” interpretation of the contrasting concerti, played “with sparkling technique as well as idiomatic pathos”, noting that “even in a crowded CD catalogue, this refreshingly unhyped CD release is one to celebrate".

Lisiecki was featured in the CBC Next! Series on March 1, 2009, on Sunday Afternoon in Concert as one of the most promising young artists in Canada. On September 7, 2009, CBC National News broadcast a Joe Schlesinger documentary about Lisiecki, "A Reluctant Prodigy". In April, 2013, Lisiecki was named one of Canada's future leaders by Maclean's Magazine.[3] In May 2013, he was featured by the national German television ZDF in the Heute Journal.[4]

Upon the school board’s recommendation, Lisiecki was accelerated four grades. In January 2011, he graduated from Western Canada High School in Calgary, Alberta, Canada. Since September 2011, he has been studying with Marc Durand for a Bachelor of Music at the Glenn Gould School of Music in Toronto on a full scholarship.

In October 2010, Lisiecki and Deutsche Grammophon signed an exclusive recording-agreement.[7] Lisiecki’s debut recording for Deutsche Grammophon features Mozart’s Piano Concertos no. 20, K. 466 and no. 21, K. 467 and was released internationally on April 16, 2012.[8] Lisiecki was signed by IMG Artists in 2010 and has been represented by Dorn Music since 2016.

Recognized for his poetic and mature playing, Lisiecki has received many prestigious awards. He has won numerous major Canadian music titles. In 2009 he was awarded Grand Prize at the OSM Standard Life Competition (the youngest in history).[22] In 2008, he won the Grand Award in both the Canadian Music Competitions (June 2008) and the Canadian Music Festival (August 2008, as the youngest in history). He is a prize winner in seven international competitions in the USA, Italy, England, and Japan.

This article uses material from the article Jan Lisiecki from the free encyclopedia Wikipedia and it is licensed under the GNU Free Documentation License.