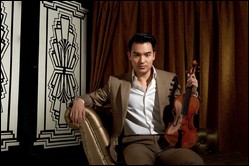 Ray Chen (born 6 March 1989) is a Taiwanese-Australian violinist. He was the first prize winner in the 2008 International Yehudi Menuhin Violin Competition and the 2009 Queen Elisabeth Competition.

Born in Taipei, Taiwan, Chen began learning violin at the age of four. Within five years he completed all 10 levels of the Suzuki Music Education (Suzuki method) in Brisbane, Australia. Chen was invited to play solo with the Queensland Philharmonic Orchestra at the age of eight. He was also invited to perform at the opening celebration concert of the 1998 Winter Olympics in Nagano, Japan.

Chen was chosen as Australia's 4MBS's "Young Space Musician of the Year" in 1999. He was awarded by the Sydney May Memorial Scholarship of the Australian Music Examinations Board (AMEB) for being the youngest and most talented musician. Chen was awarded his Licentiate Diploma of Music with distinction by the AMEB at age 11. At age 13, he won first prize in the Australian National Youth Concerto Competition (NYCC), and in 2005 won first prize in the 2005 Australia National Kendall Violin Competition.[1] Professor Goetz Richter, chair of the String Unit at the Sydney Conservatorium of Music has described Chen as "one of the most talented and accomplished young violinists to have emerged from Australia."[2] His violin teachers have included Kerry Smith and Professor Peter Zhang (Sydney Conservatorium). Chen graduated with a bachelor of music degree in violin performance under Aaron Rosand at the Curtis Institute of Music in Philadelphia.

In April 2008 Chen won the senior division first prize of the Yehudi Menuhin International Competition for Young Violinists in Cardiff, Wales. (In 2004 he had won jointly the third prize of the junior division in that competition.[3]) Chen then came to the attention of Maxim Vengerov, who served on the competition jury, and was engaged for performances including debuts with the Mariinsky Theatre Orchestra in Saint Petersburg and at the International Rostropovich Festival with the Azerbaijan State Symphony Orchestra in Baku, under the baton of Vengerov.

Following his success at the Menuhin Competition, Chen won the first prize of the 2009 Queen Elisabeth Competition in Brussels, Belgium, bringing him numerous concert engagements, a recording, and a three-year loan of the "Huggins" Stradivarius from the Nippon Music Foundation. He was the competition's youngest participant. As Grand Prize winner, he was immediately launched on a concert tour, performing with the Royal Flemish Philharmonic (DeFilharmonie) under Jaap van Zweden and Aldert Vermeulen, the National Orchestra of Belgium under Rumon Gamba, and the Luxembourg Philharmonic Orchestra under Emmanuel Krivine, as well as in recitals throughout Belgium.[4]

Chen was signed by Sony Classical in 2010.[5] He has recorded the César Franck Violin Sonata, the violin concertos of Pyotr Ilyich Tchaikovsky and Felix Mendelssohn, and more.

Chen won the Newcomer Award in the 2011 Echo Klassik Awards.[6] He was invited to perform at the annual Nobel Prize Concert in 2012, playing Max Bruch's Violin Concerto in G minor with the Royal Stockholm Philharmonic Orchestra.[7]

Chen is also known for his online presence. He has created videos on his eponymous YouTube channel pertaining to violin playing, and has collaborated multiple times with the YouTube classical musicians comedy duo TwoSetViolin.[10]

This article uses material from the article Ray Chen from the free encyclopedia Wikipedia and it is licensed under the GNU Free Documentation License.