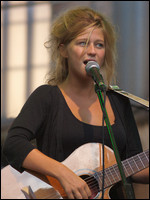 Selah Sue, (born Sanne Putseys,[1] 3 May 1989) is a Belgian musician and songwriter. Her first EP was released in 2008, under the title Black Part Love.[2] It contains five songs.

Sanne Putseys was born in Leuven,[1] but originates from the nearby Belgian town Leefdaal. At the age of fifteen, Sanne Putseys learned to play the acoustic guitar and started to write her own songs as well. When she was seventeen, Selah Sue performed as the youngest and only female artist at the open-song contest Open Mic-avond at Het Depot in Leuven. Organizer and singer Milow (born Jonathan Vandenbroeck) had noticed her talents and asked her to perform in his supporting programme. Initially, Sanne Putseys managed to work out her musical career path while studying psychology at the Katholieke Universiteit Leuven. According to her, studying psychology helped her to understand more about human emotions, which also is something that she has to deal with in her musical activities. Eventually, she continued doing warm-up performances in collaboration with artists such as Jamie Lidell in London and Paris. Furthermore, she played with the Belgian band Novastar at the Paradiso in Amsterdam.

From September 2008 until August 2009, Selah Sue received some curricular guidance from the Belgian musical theater Ancienne Belgique. The programme, in which she was involved there, has been set up to support promising artists who aren't associated with any record company or other kinds of managing assistance.

Selah Sue often covers songs of Erykah Badu and The Zutons, but she does appear to assemble a whole range of her own songs. Two of her well-known songs are "Mommy" and "Black part love", both of which are carried out acoustically. She says to be influenced by artists such as Lauryn Hill, M.I.A. and Erykah Badu.

In 2009, Selah Sue attended the stages of the North Sea Jazz Festival and that of the Lowlands. Additionally, she regularly appears on TV shows such as De Wereld Draait Door on Dutch television and several other Flemish TV shows.

In 2010, she played most of the biggest festivals in Belgium, including Les Nuits Botanique, Les Ardentes, Dour, Lokerse Feesten, Couleur Café and Pukkelpop. But also outside her native country in big festivals such as Lowlands (Netherlands) and Les Eurockéennes de Belfort (France). On November 8, 2010 she played a support appearance for Prince on his Sportpaleis concert. She then went on a mostly sold out headlining show in Belgium, France and Netherlands, presenting her forthcoming debut album.

She appears on Cee Lo Green's 2010 album The Lady Killer, duetting with him on "Please".[3]

This article uses material from the article Selah Sue from the free encyclopedia Wikipedia and it is licensed under the GNU Free Documentation License.