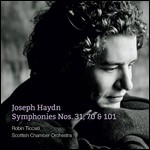 Robin Ticciati (born 16 April 1983 in London) is a British conductor of Italian ancestry. His paternal grandfather, Niso Ticciati, was a composer and arranger. His father is a barrister, and his mother is a therapist. His older brother is a violinist, and his sister is a theology professor.[1]

As a youth, Ticciati studied violin, piano and percussion, and was a member of the National Youth Orchestra of Great Britain.[2] He began conducting at age 15 whilst attending St Paul's School. Ticciati read music at Clare College, University of Cambridge. Although Ticciati has not had any formal conducting training,[3] he counts Sir Simon Rattle and Sir Colin Davis among his conducting mentors.[4][5]

Ticciati founded the chamber ensemble Aurora, which gave its first concert in April 2005, the year in which he was also awarded a Borletti Buitoni Trust Fellowship. In June 2005 he was called to substitute for Riccardo Muti for a night at the Teatro alla Scala, thus becoming its youngest conductor ever.[6] In January 2006, Ticciati became artistic advisor and chief conductor of the Gävle Symphony Orchestra, and concluded his Gävle tenure in May 2009.[4][7] In 2007, Ticciati became music director of Glyndebourne on Tour, and held the post through December 2009.[8]

Ticciati conducted the Scottish Chamber Orchestra (SCO) for the first time at Strathpeffer Pavilion, at the start of a summer 2008 Highlands concert tour.[9][10] In October 2008, the SCO announced the appointment of Ticciati as the orchestra's next principal conductor, effective as of the 2009-2010 season.[4][11] In October 2010, the SCO announced the extension of Ticciati's contract as principal conductor for an additional 3 years, through the 2014-2015 season.[12] In March 2013, the SCO further extended Ticciati's contract as principal conductor to 2018.[13] He is scheduled to conclude his SCO tenure at the close of the 2017-2018 season.[14] In July 2011, Ticciati was announced as the seventh music director of Glyndebourne Festival Opera, effective January 2014,[15][16] the first former music director of Glyndebourne on Tour to be named music director of the full Glyndebourne Opera company.

Outside of the UK, Ticciati served as Principal Guest Conductor of the Bamberg Symphony from 2010 to 2013.[17] He first guest-conducted the Deutsches Symphonie-Orchester Berlin (DSO Berlin) in October 2014.[18] In October 2015, the DSO Berlin named Ticciati its next principal conductor, effective with the 2017-2018 season, with an initial contract of 5 years.[19]

Ticcati and the SCO have recorded commercially for the Linn record label.[20] Ticciati received an Honorary Doctorate from Heriot-Watt University in 2012.[21] In April 2017 Ticciati conducted Eugene Onegin at the Metropolitan Opera in New York City, starring Anna Netrebko as Tatyana, Alexey Dolgov as Lensky and Peter Mattei in the title role.

This article uses material from the article Robin Ticciati from the free encyclopedia Wikipedia and it is licensed under the GNU Free Documentation License.

Ludwig van Beethoven Allegro con brio aus der Sinfonie Nr. 5 c-moll op. 67
Update Required To play the media you will need to either update your browser to a recent version or update your Flash plugin.