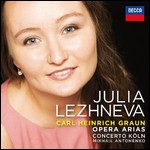 Julia Lezhneva was born on December 5, 1989 in Yuzhno-Sakhalinsk (Sakhalin island), Russia, into a family of geophysicists.[3] In 2004, Lezhneva graduated with distinction from the Gretchaninov Music School in Moscow. In June 2008, she received an honours degree for her vocal studies and a diploma for piano at the Moscow Conservatory Academic Music College. She pursued her studies from 2008 till Summer 2010 at the Cardiff International Academy of Voice (CIAV) under Dennis O'Neill with the generous support by Kempinski Arts Support Programme initiated by Marylea Van Daalen.

Lezhneva made solo appearances at the Great, Small and Rachmaninoff Halls of Moscow State Conservatory, the Great and Small Halls of Saint-Petersburg Philharmonic, the Bolshoi Theatre and also internationally in Poland, Japan, Slovakia, Great Britain, Germany, Austria, Switzerland, Spain, Norway and Italy. At the age of 12 Lezhneva began to participate in vocal competitions and festivals. She won the Grand Prix at both of Elena Obraztsova's international competitions, the 1st Competition for Young Vocalists (2006) and the 6th Competition for Young Opera Singers (2007), for which she also won all special prizes. The Jury included Christa Ludwig, Eva Marton & Teresa Berganza among others.

In August 2009 Lezhneva became the youngest ever winner of the Mirjam Helin International Singing Competition, winning the 1st prize during its 6th competition.[6] Among Lezhneva's many other awards is the Russian 'Triumph' award for her contribution to culture and art. Lezhneva performed in concerts at such international festivals as the Salzburg Mozartwoche Festival (with conductor Marc Minkowski) and Rossini Opera Festival in Pesaro (with conductor Alberto Zedda and tenor Juan Diego Flórez).[7] [8]

During the 2009/10 season, Julia gave solo performances in the UK, Poland, Germany, Austria, Switzerland, Spain, Norway, and Italy. In January 2010 she made her debut at the Salzburg Mozartwoche Festival, performing the soprano part in Mozart’s Great Mass under the baton of Marc Minkowski. In April 2010 she participated in the memorial concert for late Polish president Lech Kaczynski, singing the soprano part in Mozart’s Requiem under Marc Minkowski at the Main Square of Kraków.

Following her British debut in Liverpool during February 2010,[9] Lezhneva made her London debut on 13 May 2010, at the age of 20, singing Elena's Final Rondo from Rossini's La donna del lago at the Classical Brit awards at the Royal Albert Hall. Dame Kiri te Kanawa, recipient of the evening's Lifetime Achievement award, personally introduced Lezhneva as her protégée. Operatic tenor Dennis O'Neill, director at the Cardiff International Academy of Voice, where Lezhneva has studied since September 2008, said:

We at the International Academy of Voice at Cardiff University are delighted that our President Dame Kiri te Kanawa has chosen to present Julia as her protégé. It will launch Julia’s career on a global level and we are proud that our work here is also being recognised as the institution to have contributed to the advanced preparation and development of this new world-class artist.[10]

In 2010 Lezhneva participated in the European concert tour (Kraków, London's Barbican Centre, Castellon, and Valladolid) and recording of A. Vivaldi's Ottone in villa performing the title role of Caio with Il Giardino Armonico and Giovanni Antonini, as well as gave debut solo concerts at the Salzburg Festival with the Mozarteum Orchestra and Marc Minkowski

Highlights of the season included concert performances of Mozart’s Così fan tutte—singing the role of Fiordiligi—with Marc Minkowski and Les Musiciens du Louvre Grenoble, a debut at La Monnaie as Urbain in a new production by Olvier Py of Meyerbeer’s Les Huguenots conducted by Mr. Minkowski, Stravinsky’s Le Rossignol and Tchaikovsky’s Iolanta at the Salzburg Festival, opposite Anna Netrebko, with Ivor Bolton conducting the Mozarteum Orchestra, Mozart’s Mass in C Minor under Giovanni Antonini also at the Salzburg Festival, and an American debut in performances of the Mozart Requiem with Louis Langrée and the Mostly Mozart Festival Orchestra at Lincoln Center.

This season saw Lezhneva’s debut with Cleveland Orchestra under the baton of Franz Welser-Möst performing the Mozart’s Great Mass in C. The artist has been concertizing throughout Europe with several solo programmes, including a Handel tour throughout Grenoble, Lausanne & Berlin Staatsoper as well as a ‘Mozart Da Ponte’ tour throughout France, both projects with Marc Minkowski & Les Musiciens du Louvre. Ms Lezhneva performed a role of Trasimede in a worldwide premiere European tour (Kraków, Caen & Vienna Konzerthaus) and made a live recording of A. Vivaldi’s ‘Oracolo in Messenia’ for Virgin Classics. In return to the Salzburg Mozartwoche 2012, the artist performed soprano 2 solo in J.S. Bach’s Magnificat & W.A.Mozart’s Litanie KV243 with Marc Minkowski & MDLG. Ms Lezhneva also performed recitals with pianist Mikhail Antonenko throughout Russian Federation and Europe, including such venues as St-Petersburg Philharmonic, Ghent Festival of Flanders and Torroella Festival. Ms Lezhneva performed a concert with Philippe Jaroussky under Diego Fasolis & I Barrochisti in Neumarkt and recorded a Pergolesi Duet Album for Erato/Warner classics. Lezhneva enjoyed an overwhelming success performing G.Rossini’s La Donna del Lago Elena’s aria during the Victoires de la Musique Classique Ceremony 2012, sharing the Gala stage alongside Renée Fleming, Natalie Dessay, Philippe Jaroussky and Nathalie Stutzmann. Lezhneva continues her artistic relationship with the Salzburg Festival, for the third consecutive season, gaining extraordinary success from both public & press singing the role of Asteria in Handel’s Tamerlano at the Grosses Festspielhaus alongside Plácido Domingo, Bejun Mehta and Franco Fagioli under Marc Minkowski & MDLG.

As of November 30, 2011, Lezhneva is an exclusive DECCA solo artist.

The past season overviewed Lezhneva’s further projects with Il Giardino Armonico & Giovanni Antonini – her new DECCA Solo Album ‘Alleluia’ was released in March 2013 to major critical acclaim as well as numerous solo concerts dedicated to the CD programme were performed throughout Europe. The CD topped numerous classical charts around the world, particularly in Germany, Belgium, UK & Australia. The CD received numerous 5-star reviews from around the world as well as gained the Gramophone's "Editor's Choice", Luister 10 of 10 (Review) & ECHO-Klassik award.

On October 6, 2013 Lezhneva received her first ECHO-Klassik Award, for the Alleluia Album. She also performed at the Ceremony, held at the Berlin Konzerthaus, broadcast nationwide by ZDF Television.

Further in February 2016, Lezhneva performs Handel's Rinaldo (Almirena) on a concert tour in Brussels BOZAR, Paris TCE & Karlsruhe with Pomo d'Oro opposite Franco Fagioli. The artist's solo tour continues in April 2016 with visits to Budapest Liszt Academy on April 7 & Prague Estate Theatre for the opening of the new Mozart Festival on April 18. In May 2016 Lezhneva debuts on stage performing Mozart's Cosi fan tutte (Fiordiligi) at the Hessisches Staatstheater Wiesbaden under Konrad Junghänel. On May 30, 2016, Lezhneva performs Liederabend accompanied by Mikhail Antonenko at the Wiener Konzerthaus Mozartsaal.

If this programme of Handel arias and sacred songs is any judge, Lezhneva certainly has a phenomenal gift, a voice that ranges evenly over the most intricate coloratura, with never a blemish or sign of aspirating. It is a serene, sleek voice, beatific in timbre, with a bell-like resonance that carries well. Technically it is flawless. Like a well-groomed young acrobat, Lezhneva is at an age when fear plays no part in a performer’s armoury.

This article uses material from the article Julia Lezhneva from the free encyclopedia Wikipedia and it is licensed under the GNU Free Documentation License.

Camille Saint-Saëns Allegro scherzando aus dem Klavierkonzert Nr.2 g-moll op.22
Update Required To play the media you will need to either update your browser to a recent version or update your Flash plugin.