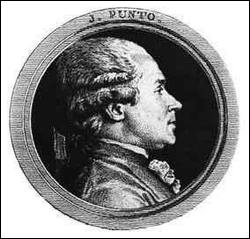 Jan Václav Stich, better known as Giovanni Punto (28 September 1746 in Žehušice, Bohemia – 16 February 1803 in Prague, Bohemia) was a Czech horn player and a pioneer of the hand-stopping technique which allows natural horns to play a greater number of notes.

Stich was born in Žehušice in Bohemia. His father was a serf bonded to the estate of Count Joseph Johann von Thun, but Stich was taught singing, violin and finally the horn. The Count sent him to study horn under Joseph Matiegka in Prague, Jan Schindelarz in Munich, and finally with A. J. Hampel in Dresden (from 1763 to 1764). Hampel first taught Stich the hand-stopping technique which he later improved and extended.

Stich then returned to the service of the Count, where he remained for the next four years. At the age of 20 Stich and four friends ran away from the estate. The Count, who had invested heavily in Stich's education, dispatched soldiers with orders to knock out Stich's front teeth to prevent him ever playing the horn again, but they failed to capture the group, and Stich crossed into Italy, into the Holy Roman Empire.

On arriving in Italy, Stich changed his name to Giovanni Punto (an approximate Italianisation of his name) and went to work in the orchestra of Josef Friedrich Wilhelm, Prince of Hohenzollern-Hechingen. From there he moved to Mainz, to the court orchestra, but left after a few years when they did not give him the post of Konzertmeister. After this he began to travel and play as a soloist, touring much of Europe including England. Charles Burney heard him play in Koblenz in 1772, describing Punto as "the celebrated French horn from Bohemia, whose taste and astonishing execution were lately so applauded in London".

Punto was particularly active in Paris, playing there 49 times between 1776 and 1788, but his use of hand-stopping was criticized by some in London, possibly due to the novelty of the technique. In 1777, he was invited to teach the horn players in the private orchestra of George III.

Punto also composed pieces to demonstrate his own virtuosity (a common practice then), which indicate that he was a master of quick arpeggios and stepwise passagework.

In 1778 Punto met Mozart in Paris, after which Mozart reported to his father Leopold that "Punto plays magnifique." Punto was to play the horn part in Mozart's Sinfonia Concertante for Four Winds K297b but at the last minute this was dropped from the programme and subsequently lost. The same year Punto probably entered into an arrangements with some Parisian publishers; nearly all his subsequent compositions were published in Paris, whereas they were previously listed in Breitkopf's catalogue. A new horn was also made for him in 1778, a silver cor solo, which he used for the rest of his life.

Punto sought a permanent position in which he could conduct as well as compose and play, and in 1781 he entered the service of Franz Ludwig von Erthal, the Prince-bishop of Würzburg, later moving to become the Konzertmeister (with a pension) for the Comte d’Artois (later to become Charles X of France) in Paris. He was successful enough in this role that in 1787 he was able to secure leave of absence and tour the Rhineland in his own coach, a mark of considerable wealth at the time.

On returning to Paris in 1789 Punto was appointed conductor of the Théâtre des Variétés Amusantes, where he remained for ten years, leaving in 1799 when he was not appointed to the staff of the newly founded Paris Conservatoire. Moving on to Vienna via Munich, Punto met Ludwig van Beethoven, who wrote his Op. 17 Sonata for Horn and Piano for the two of them. They premiered the work on 18 April 1800 at the Burgtheater and played the work again the following month in Pest, Hungary.

In 1801, Punto returned to his homeland after 33 years, playing a grand concert on 18 May in the National Theatre in Prague. A reviewer commented that Punto "received enthusiastic applause for his concertos because of his unparalleled mastery, and respected musicians said that they had never before heard horn playing like it". The reviewer commented on his innovative techniques, noting that "in his cadenzas he produced many novel effects, playing two and even three-part chords", and added that Punto was evidence that Bohemia was able to produce "great artistic and musical geniuses".

In 1802, after a short trip to Paris, Punto developed pleurisy, a common illness among wind players. He died five months later on 16 February 1803, being accorded a "magnificent" funeral in the Church of St. Nicholas attended by thousands. Mozart's Requiem was performed at the graveside.

Franz Joseph Fröhlich wrote that "what distinguished Punto, in a way that one has never heard in any other artist heretofore, was his most magnificent performance, the gentlest portrayals, the thunder of tones and their sweetest indescribable blending of nuances with the most varied tone production, an agile tongue, dexterous in all forms of articulation, single and double tones, and even chords, but most important, a silver-bright and charming cantabile tone."

Among his surviving compositions are:

This article uses material from the article Giovanni Punto from the free encyclopedia Wikipedia and it is licensed under the GNU Free Documentation License.

John Field Adagio und Rondo aus dem Klavierkonzert Nr. 4 Es-Dur
Update Required To play the media you will need to either update your browser to a recent version or update your Flash plugin.