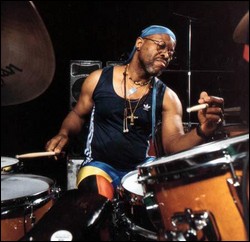 Jai Johanny Johanson (born on July 8, 1944), frequently known by the stage name Jaimoe, is an American drummer and percussionist. He is best known as one of the founding members of The Allman Brothers Band.

Johanson came up in the R&B world and began drumming at an early age, often accompanied by friend Lamar Williams on bass. Johanson backed soul singers, including a membership in Otis Redding's touring band in 1966, and afterward touring with the acclaimed soul duo, Sam & Dave. After joining up with Duane Allman in February 1969, he quickly became the first recruit into Allman's new group, soon joined by bassist Berry Oakley, fellow drummer Butch Trucks, guitarist Dickey Betts and lastly Allman's younger brother, singer, organist and pianist Gregg Allman. The group, quickly named after the brothers Allman, began recording demos that April in Macon, Georgia, which became the group's home base.

The band's mixture of blues, country, jazz, and rock, spearheaded by the dual lead guitars of Betts and Allman, and the double-drums of Trucks and Jaimoe, was unique at that time, and they rapidly became known as an act that "you had to see live". Their first two albums, their eponymous debut (November 1969) and Idlewild South (September 1970) brought positive critical reviews but only limited commercial success. Their third album, however, recorded live in March 1971 at one of their favorite concert halls, Bill Graham's Fillmore East in New York City in March 1971, made them one of the biggest rock acts in America. At Fillmore East became a RIAA certified gold album in late October 1971, finally bringing the group the chart success that had eluded them. The band quickly suffered tragedy, however. Duane Allman was killed in a motorcycle accident a few days later. Shaken by the loss of Allman, the group soldiered on and released Eat A Peach, which reached #4 in the Billboard charts in 1972, a hybrid studio and live album, with outtakes from the Fillmore East concerts and studio cuts both with and without their original leader.

After touring in late 1971 and early- to mid-1972 as a five piece band, the group added keyboardist Chuck Leavell to their line-up, and began recording their fifth album. After recording only a handful of tracks, however, Berry Oakley was also killed in a motorcycle accident mere blocks from where Duane Allman had been struck. Lamar Williams, a bass guitarist who was a friend of Johansen, became a member of the group in the wake of Oakley's death. The album that resulted, 1973's Brothers and Sisters, added more of a country feel to their trademark sound and gave the group their only hit single, "Ramblin' Man". Just prior to the release of the album, they co-headlined the largest one-day rock concert in American history, in 1973 Summer Jam at Watkins Glen, complementing the Grateful Dead, and The Band as a support act.

In 1975, the Allman Brothers Band released the tepid Win, Lose or Draw, which, while a chart success, signaled an end for the band. A growing distance between Gregg Allman, who had risen to a defacto bandleader (then based in Los Angeles) and the rest of the band (still based in Macon, Georgia) exacerbated tensions. Perhaps most telling, the double drums of Jaimoe and Trucks, a signature of the group's sound, turned up missing on two of the album's seven tracks, with the drumming provided by producer Johnny Sandlin and occasional session musician, road drummer Bill Stewart (not the jazz drummer of the same name). The next year, the group disbanded in a storm of drug abuse and acrimony involving Gregg Allman's testimony at the drug trial of former roadie, Scooter Herring. Betts and Allman focused on their own careers, while Johanson joined forces with Leavell and Williams in the jazz-rock combo Sea Level. Johanson played with Sea Level on their first two albums, before rejoining the reformed Allman Brothers Band in 1979.

After being terminated from the band in late 1980 due to increasing back problems stemming from a 1974 automobile accident, and the group's financial woes, Johanson lived near poverty in Macon for nearly a decade (playing off and on with "SouthBound" - Coop Frazier, Mike Joseph, Edd Anderson, and Stan Daniell at a small honkytonk in Forsyth, Georgia), before being invited back into the group in 1989. Reunited with the group and rejuvenated by the growing jam band scene that viewed the Allman Brothers Band as one of the pioneering influences in the newly named genre, Johanson helped lead the band back into national prominence. Though guitarist Warren Haynes, bassist Allen Woody and pianist Johnny Neel (all having joined the Allmans with their second reformation in 1989) would all leave, as would Haynes' replacement, Jack Pearson, Jaimoe remained. However, he watched Dickey Betts' acrimonious departure in 2000, who was ultimately to be replaced by a returning Warren Haynes. Despite their difficulties, he continued with the band.

The past two decades have seen renewed success for the band. Jaimoe, Butch Trucks and Gregg Allman have been joined by percussionist Marc Quiñones (in 1991), bassist Oteil Burbridge (1997), guitar and vocalist, Warren Haynes (1989-1997; then again starting in 2000), and slide guitarist Derek Trucks (in 1999). Every March, the band had taken up a residency at New York's Beacon Theatre for several weeks of shows, often featuring an extended percussion battle between Trucks, Jaimoe and Quiñones. This practice came to a final halt, after forty years of performances since the Cirque du Soleil was given a permanent contract year-round at the Beacon Theatre. To celebrate this final tradition, in 2009, the band dedicated that year's multiple concerts to the late Duane Allman, inviting special guests from many genres to participate with them, including Eric Clapton, Levon Helm, Trey Anastasio, and many others.

Jaimoe and the Allman Brothers Band are members of the Rock and Roll Hall of Fame.

This article uses material from the article Jai Johanny Johanson from the free encyclopedia Wikipedia and it is licensed under the GNU Free Documentation License.