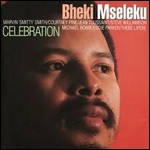 Bhekumuzi Hyacinth Mseleku, generally known as Bheki Mseleku (3 March 1955[1] 9 September 2008[2]), was a jazz musician from South Africa. He was a pianist, saxophonist, guitarist, composer and arranger who was entirely self-taught.[3]

Mseleku's father was a musician and teacher, and a Cambridge University music graduate, who had religious beliefs that prevented his children from ready access to the family's upright piano in case any of them should pursue something as "devilish" as music.[4] His mother gave him the keys while his father was away, but the piano ended up as firewood one winter's evening. During his childhood, Mseleku suffered the loss of the upper joints of two fingers in his right hand from a go-karting accident.[4] He explained in a 1994 South Bank Show dedicated to him that this was wholly due to the restricted health care available to Black South Africans under Apartheid.

Mseleku started his musical career in Johannesburg in 1975 as an electric organ player for an R&B band, Spirits Rejoice.[5] After performing at the Newport Jazz Festival in 1977, Mseleku settled in Botswana for a time,[4] moved to London, England, in the late 1970s,[6] and made an attempt to settle into the jazz scene in Stockholm from 1980 to 1983,[3] but then returned to London. It was not until 1987 that Mseleku made his debut at the prominent Ronnie Scott's Jazz Club,[7] playing piano unaccompanied by other musicians, with a saxophone in his lap.[3]

His 1991 album Celebration, which featured Courtney Pine among a number of British players as guests, was nominated for a Mercury Music Prize. After this, he was taken up by the major Verve label for several albums. The first of these featured a number of American players including Joe Henderson, Abbey Lincoln and Elvin Jones. In 1996, Mseleku won a KORA All Africa Music Award in the category Best Instrumentalist (Southern Afrika).[8]

With his last record, Home at Last (2003), Mseleku, "a self-confessed 'Citizen of the World'", explored "home" as being "a spiritual construct made up of special people and relationships, those that came along on the long hard road, those that were left behind to be re-visited later."[7]

Mseleku was diabetic and at one time had been diagnosed as bipolar.[4] He died in his London flat, having spent most of his last years back in South Africa, but without finding an outlet for his skills there;[9] his home was burgled at one point, which he took badly, and he lost the mouthpiece John Coltrane had used for the recording of A Love Supreme, given to him by Alice Coltrane at Newport.[4]

Over the two years prior to his death, he had established a new band in London, and had made several well received appearances around the country.

This article uses material from the article Bheki Mseleku from the free encyclopedia Wikipedia and it is licensed under the GNU Free Documentation License.

Friedrich Gernsheim Präludium Nr. 6 Allegro molto agitato aus 6 Präludien für Klavier op.2
Update Required To play the media you will need to either update your browser to a recent version or update your Flash plugin.