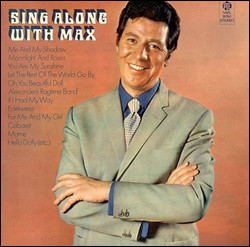 born on 16/10/1922 in Rotherhithe, London Borough of Southwark, United Kingdom

Bygraves was born to Henry and Lillian (née McDonnell) Bygraves (who wed in 1919) in London,[1] where he grew up in poverty in a two-room council flat with his five siblings, his parents and a grandparent.[2] His father was a professional flyweight boxer, known as Battling Tom Smith, and a casual dockworker.[3] Raised Catholic, he attended St Joseph's School, Paradise Street, Rotherhithe, and sang with his school choir at Westminster Cathedral.[1]

He left school at 14, working at the Savoy Hotel in London as a pageboy, but was sacked for being too tall. He then became a messenger for an advertising agency in Fleet Street, before serving as a fitter in the RAF in World War II and working as a carpenter.[4] He changed his name to Max Bygraves in honour of comedian Max Miller.[5]

Bygraves' catchphrase was said to be: "I wanna tell you a story".[5] It was actually Mike Yarwood who made up that phrase, from Bygraves' "I want to tell you a joke". He portrayed the title character in the 1956 film Charley Moon. It was revealed that Bygraves had bought the past and future rights to the Lionel Bart musical Oliver! for £350 to help Bart out of his severe financial difficulties. Bygraves later sold them for £250,000.[6]

In the 1950s and 60s, Bygraves appeared as a guest on several television variety programs both in the UK and United States. These included Ed Sullivan, Jack Benny, and Jackie Gleason, in America, but his place as a broadcasting icon was founded, along with several fellow artists, by appearing as guest 'tutor', to Peter Brough's ventriloquist dummy, Archie Andrews, in the long running BBC radio show Educating Archie.

He was the subject of This Is Your Life in 1961 when he was surprised by Eamonn Andrews while rehearsing his new show, Do Re Mi, at Londons Prince of Wales Theatre.

From 1983 to 1985, Bygraves hosted Family Fortunes, taking over from his friend and fellow comedian Bob Monkhouse. He would later be succeeded as host in 1987 by Les Dennis.

On 9 August 1974, Bygraves became stuck on a cliff near his house in Westbourne, Bournemouth, when a kite flown by his grandson Michael became trapped beneath the edge of the cliff. He suffered friction burns on his hands and was in shock when police and firefighters helped him to safety.[9]

In 1999, Bygraves underwent treatment for an ear disorder having cancelled a number of performances on his doctor's advice.[10]

Bygraves died on 31 August 2012, aged 89, at his home in Hope Island, Queensland, Australia, after being diagnosed with Alzheimer's disease.[11][12]

This article uses material from the article Max Bygraves from the free encyclopedia Wikipedia and it is licensed under the GNU Free Documentation License.