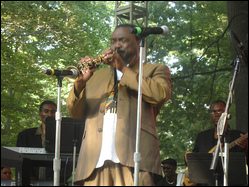 Ronald Wayne "Ronnie" Laws (born October 3, 1950, Houston, Texas)[1] is an American jazz, rhythm and blues and funk saxophonist. He is the younger brother of jazz flautist Hubert Laws and the older brother of Debra Laws.

Laws is the fifth of eight children born to Hubert Laws, Sr. and Miola Luverta Donahue.[1]

In 1975, he began his solo career with the album Pressure Sensitive, which yielded his most famous instrumental song, "Always There." The song became an instant jazz-funk classic, covered by numerous artists.

In 1978 he released the album titled Flame under United Artists Records and from it a 12" single was released called "All for You," as well as additional tracks (from previous albums) entitled "Let's Keep it Together" and "Nuthin' 'bout Nuthin." The 12" single was his first issued in the UK as well as the US, and paved the way for this format to be used for promoting artists' work at the time without the need to obtain the full LP.

A tribute to Ronnie Laws' aforementioned hit, "Always There," was performed in 1999 by a group of musicians including Boney James, Rick Braun, Kirk Whalum, Kenny Garrett and Larry Carlton at the Montreux Jazz Festival. The performance can be seen on the Casino Lights '99' DVD.

More recently in June 2005, Laws' 1980 LP Every Generation was issued on CD format for the first time. The original tracks are "Young Child," "Never Get Back to Houston," "Every Generation," "Tomorrow," "O.T.B.A.," "Love's Victory," "Thoughts and Memories" and "As One."

This article uses material from the article Ronnie Laws from the free encyclopedia Wikipedia and it is licensed under the GNU Free Documentation License.