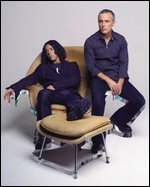 Roland Orzabal (born 22 August 1961) is an English musician, singer-songwriter, and record producer. He is best known as a co-founder of Tears for Fears, of which he is the main songwriter and joint vocalist, but he has also achieved success as a producer of other artists. In 2014, Orzabal published his first novel.

Orzabal was born in Portsmouth, Hampshire and raised in Leigh Park. His family later moved to Bath where he attended Culverhay School and later became a member of the Zenith Youth Theatre Company.[1]

Orzabal's mother is English and his father (George Orzabal de la Quintana) is from Paris, France, of Spanish-Basque descent.[1] Roland's grandfather, Arturo Orzabal de la Quintana, was from Buenos Aires, Argentina and son of emigrants from the Basque Country. Orzabal was named Raoul for the first two weeks after his birth, but this was changed to Roland to anglicise the name as the family were living in England. When Orzabal was three years old, his father had a nervous breakdown which left him semi-bedridden for a large portion of Orzabal's childhood. His father decided to run an entertainment business with his mother, a dancer, resulting in different entertainers often hanging around Orzabal's home. He describes his childhood as "unorthodox," and it inspired various Tears for Fears songs, particularly on The Hurting.

Orzabal met Curt Smith while both were in their early teens in Bath, Somerset. In the late-1970s, they formed a mod music group, Graduate, along with three other members. Following the release of their debut album, Acting My Age, the group disbanded and Orzabal and Smith went on to form Tears for Fears, a new wave/synthpop outfit directly inspired by the writings of the American psychologist Arthur Janov.[2]

After a decade of major international success, Orzabal and Smith had an acrimonious split in the early 1990s. Although Orzabal continued to work as Tears for Fears after he and Smith parted ways, the subsequent TFF albums Elemental (1993) and Raoul and the Kings of Spain (1995) are effectively solo works by him in all but name. Elemental was a success being certified as Gold status in the US and Silver in the UK, while Raoul took a more artistic direction but garnered less chart success. In April 2001 he released his first proper solo album, Tomcats Screaming Outside, under his own name.[3] Orzabal and Smith had reconciled by that point and were working on a new Tears for Fears album together (2004's Everybody Loves a Happy Ending).

Work as a producer/songwriter

As a songwriter, Orzabal is a two-time Ivor Novello Award winner. His first award was in 1986 for "Songwriter of the Year" following the release of Tears for Fears' second album Songs from the Big Chair for which Orzabal wrote or co-wrote all of the tracks.[4]

In addition to co-producing most of Tears for Fears' records, Orzabal also co-produced Oleta Adams' album Circle of One (1990), following on from Adams' collaboration on the 1989 Tears for Fears album The Seeds of Love. The album reached No. 1 in the UK and No. 20 in the US, and featured her transatlantic top ten hit "Get Here". Orzabal also co-wrote the lead track "Rhythm of Life" for the album, which was originally intended for The Seeds of Love. As well as playing guitar and singing backing vocals on the track, he also appeared in the song's accompanying promo video.

In 1999, Orzabal co-produced the Icelandic singer-songwriter Emiliana Torrini's album Love in the Time of Science, along with Tears for Fears associate Alan Griffiths. The pair also wrote two tracks for the album.[5]

Orzabal's talents as a songwriter were recognised again after Michael Andrews and Gary Jules recorded the song "Mad World" for the film soundtrack Donnie Darko in 2001.[6] Their version was released as a single in 2003 and became the Christmas number one single in the UK that year, ultimately becoming the year's biggest selling single. The song was originally composed by Orzabal and was Tears for Fears' first hit single in 1982. In 2004, the song won Orzabal his second Ivor Novello Award, as the songwriter of the Best Selling UK Single of 2003.[7]

Orzabal has written a novel, a romantic comedy entitled Sex, Drugs & Opera, published in 2014. It tells the story of a middle-aged pop star, Solomon Capri, who is semi-retired but is approached to take part in the reality show Popstar to Operastar which he sees as a way to rejuvenate his career and his waning marriage. The story was inspired by Orzabal's own experience as he was approached by the ITV show himself, though did not take part.[8][9]

In 1985, Orzabal gained considerable press attention for his strained relationship with his father and a humorous cartoon was printed in the UK tabloid The Sun pertaining to this. The cartoon was later reprinted within the cover artwork for the Tears for Fears single "I Believe".[1]

Orzabal married his wife Caroline (née Johnston) at Bath Register Office in 1982.[10] They have two sons, Raoul (b.1991) and Pascal (b.1994). Caroline can be heard singing the child vocal on the Tears for Fears song "Suffer the Children" from the band's debut album The Hurting,[11] and also drew the "hands" cover artwork for the 1983 re-release of "Pale Shelter". In July 2017, Caroline passed away from natural causes. The remaining shows on the tour (co-headlining with Hall and Oates) were postponed, so Roland could mourn.[12] Roland resumed the tour on September 14, 2017, at the Staples Center in Los Angeles.

This article uses material from the article Roland Orzabal from the free encyclopedia Wikipedia and it is licensed under the GNU Free Documentation License.