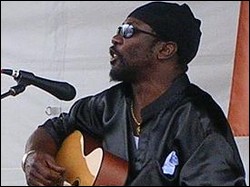 Frederick Nathaniel "Toots" Hibbert (born 8 December 1942) is a Jamaican singer and songwriter, known as the leader for the reggae and ska band Toots & the Maytals.

Born in May Pen, Parish of Clarendon, Jamaica, the youngest of seven children, he grew up singing gospel music in a church choir. He moved to Kingston as a teenager in the early 1960s, and met Raleigh Gordon and Jerry Matthias, and they formed The Maytals. The Maytals became one of the most popular vocal groups in Jamaica in the 1960s, recording with producers Coxsone Dodd, Prince Buster, Byron Lee and Leslie Kong. This success included winning Jamaica's National Popular Song Contest three times with songs Hibbert wrote: in 1966 with "Bam Bam", 1969 with "Sweet and Dandy", and 1972 with "Pomps & Pride".[1]

In 1966 he was sentenced to 18 months in prison for possession of marijuana.[2] This experience provided the inspiration for one of his best known songs, "54-46 That's My Number".[2]

Hibbert was one of the first artists to use the word reggae, in 1968's "Do The Reggay", an early reggae song. He also appeared in the groundbreaking Jamaican film The Harder They Come. Toots still tours the world today, and his band won the Grammy for best reggae album in 2004. In 2006, Toots & the Maytals covered Radiohead's "Let Down" for the Easy Star All-Stars album Radiodread, a reggae version of the English rock band's OK Computer.

Much of Hibbert's recorded output reflects his mainstream evangelical Christian upbringing. He has been known to also write about Rastafarian themes as well. He also can play every instrument in his band.[3]

Toots collaborated with executive producer Malik Al Nasir of MediaCPR and Steel Pulse's Sidney Mills, who produced Jamaican percussionist Larry McDonald's album Drumquestra released in 2009. Toots' track is called "What about the Children?", a house track with accompanying video shot on location in New York. Toots performed vocals with Iowa reggae band Public Property on their album Work to Do in 2009.

Hibbert collaborated with the Jacksonville, Florida southern rock/blues group, JJ Grey & MOFRO. He is featured in their song, "The Sweetest Thing", on their album, Georgia Warhorse.

Hibbert joined the Red Hot Chili Peppers for a performance of "Louie Louie" during their New Year's Eve performance on December 31, 2011 held in St. Barts[disambiguation needed] by Russian billionaire, Roman Abramovich. The private bash was invitation only and around 300 guests including George Lucas, Martha Stewart, Marc Jacobs and Jimmy Buffett attended the party at Abramovich's $90 million estate.[5]

In May 2013 he received a head injury after being hit by a thrown bottle during a performance at the River Rock Festival in Richmond, forcing him to cancel several months of live shows.[6]

The bottle was thrown by William C Lewis. Lewis was facing a charge of malicious wounding but plead guilty to lesser charges. Despite Toots pleading in a letter to the judge, "He is a young man, and I have heard what happens to young men in jail. My own pain and suffering would be increased substantially knowing that this young man would face that prospect., the judge gave Lewis a six month sentence.[7]

In August 2012 it was announced that Hibbert would receive Jamaica's fifth highest honour, the Order of Jamaica.[8]

This article uses material from the article Toots Hibbert from the free encyclopedia Wikipedia and it is licensed under the GNU Free Documentation License.