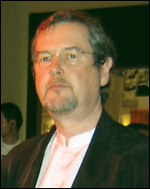 Richard Harvey (born 25 September 1953) is a BAFTA Awardwinning British musician and composer. Originally of the mediaevalist progressive rock group Gryphon, he is best known now for his film and television soundtracks. He is also known for his guitar concerto Concerto Antico, which was composed for the guitarist John Williams and the London Symphony Orchestra.

Harvey is sometimes confused with fellow British composer/musician Richard Hartley because of their similar last names.

Born in London, Harvey soon became involved in music, learning the recorder when he was four years old, switching first to percussion and later playing clarinet in the British Youth Symphony Orchestra.[1] By the time he graduated from London's Royal College of Music in 1972, he was accomplished on the recorder, flute, krumhorn, and other mediaeval and Renaissance-era instruments, as well as the mandolin and various keyboards. He could have joined the London Philharmonic Orchestra, but instead chose to work with Musica Reservata, an early music ensemble. He subsequently met another RCM graduate, Brian Gulland, and went on to form the progressive rock and folk band Gryphon. During that period, he also worked with other folk rock musicians such as Richard and Linda Thompson and Ashley Hutchings. When Gryphon wound down in the late 1970s, he became a session musician, playing on Kate Bush's Lionheart, Gerry Rafferty's Night Owl, Sweet's Level Headed and Gordon Giltrap's Fear of the Dark and The Peacock Party, among others. He also had a brief spell in New Wave outfit The Banned.

After working with film composer Maurice Jarre in the mid 1970s, he became involved in composing for film and television. His first work was to provide music for the television series Tales of the Unexpected in 1979. He has subsequently supplied scores to over 80 television and film projects.

Notable works include 1979's Martian Chronicles ending titles, 1984's wistful Shroud for a Nightingale theme for the PD James detective series, 1985's Defence of the Realm, Alan Bleasdale's G.B.H in 1991 which he co-wrote with Elvis Costello (and which won them, jointly, a British Academy of Film and Television Arts award) and most recently in 2006 Ron Howard's The Da Vinci Code and Gabriel Range's Death of a President.

In addition he has been a musician on such films as The Lion King, Enemy of the State and Harry Potter and the Prisoner of Azkaban.

Harvey is also a prolific composer of production music.

In 1984, he was a conductor on one of a series of classic rock albums by the London Symphony Orchestra. He has frequently toured and recorded with the guitarist John Williams on projects including the 2002 album Magic Box. He also played on the 2004 album The Opera Band by pop/classical crossover act Amici Forever, which reached #74 on the Billboard Top 200 albums and #2 on the Billboard Top Classical crossover chart. He worked with Elvis Costello on his 2006 album My Flame Burns Blue. A skilled multi-instrumentalist, he has a collection of over 700 different instruments from around the world.[2]

Since 2005, "John Williams & Richard Harvey's World Tour" has appeared in many different countries, from Japan and China to Ireland and Luxembourg, with the duo playing a mixture of world and classical music spanning five continents and five centuries, featuring Chinese, African and European instruments.

This article uses material from the article Richard Harvey from the free encyclopedia Wikipedia and it is licensed under the GNU Free Documentation License.