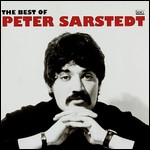 Peter Eardley Sarstedt[1] (10 December 1941 – 8 January 2017), briefly billed early in his career as Peter Lincoln, was a British singer, instrumentalist and award-winning songwriter. He was the brother of musicians Eden Kane and Clive "Robin" Sarstedt.

Although his music was classified as pop, it generally encompassed ballads derived from traditional folk music rather than traditional rock and roll. He was best known for writing and performing the single "Where Do You Go To (My Lovely)?", which topped the UK Singles Chart in 1969. Set to a "faux European waltz tune"[2] and described as "a romantic novel in song",[3] it won an Ivor Novello Award. The record remained Sarstedt's biggest hit, despite his releasing numerous successful albums and singles from the late 1960s onwards.

Sarstedt was born in Delhi, India, in what was then part of the British Raj, as one of six siblings, to Albert and Coral[5][6][2][7] in 1941, where his parents were civil servants in the British administration.[7] Both of his parents had trained as classical musicians.[8] Sarstedt attended Victoria Boys' School, a boarding school in Kurseong in the Darjeeling district of West Bengal, where his parents worked in a tea plantation.[7][9] His family returned to the UK in 1954,[7][9] settling in south London just before the rock 'n' roll boom,[7][10] and the Sarstedt brothers started out performing skiffle music.[7]

Sarstedt was a younger brother of the 1960s pop star Eden Kane, for whom he briefly played bass, and an elder brother of pop singer Clive Sarstedt.[11]

Sarstedt was best known for his 1969 UK number-one single, released on the United Artists label, "Where Do You Go To (My Lovely)?", a portrait of a poor-born girl who becomes a member of the European jet set.[4][12] The song topped the chart in 14 countries.[2][7] It was also awarded the 1970 Ivor Novello Award for Best Song Musically and Lyrically.[8][13] He later cited his first wife Anita as the inspiration for the song.[3]

In the 1980s and 1990s, Sarstedt frequently toured the southern UK as part of the "Solid Silver '60s" package tours,[16] having returned to England after several years residing in Denmark.[5][17] In the 1990s and 2000s, he continued to release new albums and tour. In 1997 he released the album England's Lane, which featured the follow-up to "Where Do You Go To", entitled "The Last of the Breed"[18] and in 2007 an album of new material called On Song.[19] He sang harmonies on "Don't Think Twice" and "The Last Thing on My Mind" on Canadian singer Peter Thompson's 2007 album, Taking a Dive (Heart First).

New interest was sparked in his music after "Where Do You Go To" was used in the 2007 Wes Anderson films Hotel Chevalier and The Darjeeling Limited.[4][7] In 2012, a compilation of songs called Highlights – the Demos was released.[20]

Sarstedt's final album, released in 2013, was entitled Restless Heart.[14] It was produced by Ray Singer and the single and accompanying video "Valentine", directed and produced by Lara Singer, was released on Singer Records.[21] A third instalment of "Where Do You Go To", continuing the story of Marie-Clair, to be titled "Farewell Marie-Clair", unfortunately did not materialise.[22] Sarstedt last performed live in 2010.[23]

In 1969 he married dentist Anita Atke and moved to Denmark. The couple divorced five years later.[3] Sarstedt's second wife was Joanna Meill. From 2013 he lived in a retirement home in Sussex, England. He had progressive supranuclear palsy (PSP), diagnosed in 2015, but originally misdiagnosed as dementia in 2013.[23] He died on 8 January 2017 at the age of 75.[4][24] He is survived by his wife and two adult children.[3]

This article uses material from the article Peter Sarstedt from the free encyclopedia Wikipedia and it is licensed under the GNU Free Documentation License.

Gioachino Rossini Sonate für Streicher Nr.1 G-Dur
Update Required To play the media you will need to either update your browser to a recent version or update your Flash plugin.