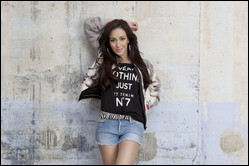 Kenza Farah (born July 8, 1986) is a Franco-Algerian singer-songwriter. Her album Authentik won gold in its second week.[1] It was followed up by Avec le coeur and Trésor.

Kenza Farah was born on born July 8, 1986 in Béjaïa, Algeria and grew up in the 15th arrondissement of Marseille. She has six siblings. At the age of 14, she began playing shows in neighborhoods and won singing contests. Followed by a singing competition, Farah met the producers who allowed her to record some songs in the studio, including "Mon Ange", "Trésor" and "Il ma trahie". She was noticed by the producer Abdel.B, who produced her album from 2006-2007 with the independent record label Karismatik.

She is known for her collaborations with many artists such as Sefyu, Le Rat Luciano, Idir, Big Ali, Psy 4 de la Rime, Nina Sky, Roldán of the group Orishas, Busy Signal, Alonzo, Melissa M, Kayline and Nabila (of Karismatik), Soprano, and Ahmed Chawki amongst others.

This article uses material from the article Kenza Farah from the free encyclopedia Wikipedia and it is licensed under the GNU Free Documentation License.

Joseph Haydn Sinfonie Nr. 96 D-Dur "Le Miracle"
Update Required To play the media you will need to either update your browser to a recent version or update your Flash plugin.