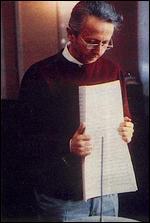 Born at Castelfranco Veneto (where he currently lives), he studied music in Venice. Later he was engaged as violinist in the RAI orchestra of Milan.

In the late 1970s and early 1980s he became popular as a long-standing collaborator of singer-songwriter Franco Battiato, by whom he was initially hired as violin teacher. Apart from working as a producer and musician on several successful albums with Battiato (including L'era del cinghiale bianco and La voce del padrone), Pio also collaborated with him as a producer for several singers such as Milva, Alice and Giuni Russo. In 1984 Pio, Battiato and lyricist Rosario "Saro" Cosentino penned the Eurovision Song Contest entry "I treni di Tozeur", performed by Battiato and Alice, which finished 5th in the contest and became a considerable commercial success in Continental Europe and Scandinavia. Pio also released two instrumental LPs (also in collaboration with Battiato) under his own name, entitled Legione straniera (1982) and Restoration (1983).

This article uses material from the article Giusto Pio from the free encyclopedia Wikipedia and it is licensed under the GNU Free Documentation License.