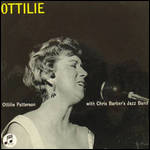 Ottilie Patterson (31 January 1932 – 20 June 2011) was a Northern Irish blues singer best known for her performances and recordings with the Chris Barber Jazz Band in the late 1950s and early 1960s.

Anna Ottilie Patterson was born in Comber, County Down, Northern Ireland, on 31 January 1932. She was the youngest child of four. Her father, Joseph Patterson, was from Northern Ireland, and her mother, Jlija Jgers, was from Latvia. They met in southern Russia.[1] Ottilie's name is an Anglicised form of the Latvian name "Ottilja".[1] Both sides of the family were musical, and Ottilie trained as a classical pianist from the age of eleven, but never received any formal training as a singer.[2]

In 1949 Ottilie went to study art at Belfast College of Technology, where a fellow student introduced her to the music of Bessie Smith, Jelly Roll Morton, and Meade Lux Lewis. [3] In 1951, she began singing with Jimmy Compton's Jazz Band, and in August 1952 she formed the Muskrat Ramblers with Al Watt and Derek Martin.

In the summer of 1954, while holidaying in London, Ottilie met Beryl Bryden, who introduced her to the Chris Barber Jazz Band.[4]

She joined the Barber band full-time on 28 December 1954,[1] and her first public appearance was at the Royal Festival Hall on January 9, 1955.[5] Between 1955 and 1962 Ottilie toured extensively with the Chris Barber Jazz Band and issued many recordings: those featuring her on every track include the EPs Blues (1955), That Patterson Girl (1955), That Patterson Girl Volume 2 (1956), Ottilie (1959), and the LP Chris Barber's Blues Book (1961); she also appeared on numerous Chris Barber records.

From 1963 or so, she began to suffer throat problems and ceased to appear and record regularly with Chris Barber, officially retiring from the band in 1973. During this period she recorded some non-jazz/blues material such as settings of Shakespeare (with Chris Barber) and in 1969 issued a solo LP 3000 years with Ottilie which is now much sought by collectors.

In early 1983, Ottilie and Chris Barber gave a series of concerts around London, which were recorded for the LP Madame Blues and Doctor Jazz (1984). This is her most recently issued recording.

Ottilie is buried in Movilla Abbey Cemetery, Newtonards, Northern Ireland in the Patterson family grave. Her gravestone, marked Ottilia Anna Barber, is by the wall adjacent to the car park.

In Feb 2012 a plaque marking her birthplace in a terrced house in Comber was unveiled and the same evening a sell-out musical Tribute was performed at the La Mon Hotel, Comber.

Dates below are issue dates - if the recording date is very different it is noted. Deleted CDs have the catalogue number The principal source for this discography is Bielderman and Purser's Chris Barber discography.[6]

This article uses material from the article Ottilie Patterson from the free encyclopedia Wikipedia and it is licensed under the GNU Free Documentation License.