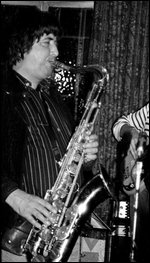 Coe began his performing career playing with Humphrey Lyttelton's band from 1957 to 1962. In 1965 he was invited to join Count Basie's band ('I'm glad it didn't come off – I would have lasted about a fortnight')[2] and has since played with the John Dankworth Orchestra, the Kenny Clarke-Francy Boland Big Band, Derek Bailey's free improvisation group Company, Stan Tracey, Michael Gibbs, Stan Getz, Dizzy Gillespie and Bob Brookmeyer, and performed under Pierre Boulez as well as leading a series of groups of his own, including Coe Oxley & Co with drummer Tony Oxley. He played clarinet on Paul McCartney's recording of "I'll Give You A Ring", released in 1982,[3] and saxophone on John Martyn's 1973 album Solid Air.

Coe has also worked with the Matrix, a small ensemble formed by clarinettist Alan Hacker, with a wide-ranging repertoire of early, classical and contemporary music, the Danish Radio Big Band, Metropole Orchestra and Skymasters in the Netherlands.

In 1975 a grant from the Arts Council enabled him to write Zeitgeist, a large-scale orchestral work fusing jazz and rock elements with techniques from European Art Music.

Among the awards Coe has received are an honorary D.Mus and the Danish Jazzpar Prize (1995, the first non-American to receive this prize).

One of Tony Coe's sons is radio broadcaster Gideon Coe.

Citing Paul Gonsalves as an influence, Coe is especially noted for his versatility.

"Tony Coe is one of the most remarkable and brilliant musicians in the world. The sheer range of his musical activity… …is staggering and testifies to an awe-inspiring instrumental mastery." Humphrey Lyttelton[4]

"Coe is a player of astonishing versatility and brilliance." Ian Carr[5]

This article uses material from the article Tony Coe from the free encyclopedia Wikipedia and it is licensed under the GNU Free Documentation License.