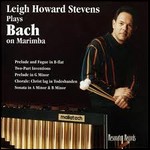 Leigh Howard Stevens (born March 9, 1953 in Orange, New Jersey) is a marimba artist best known for developing, codifying, and promoting the Stevens technique or Musser-Stevens grip, a method of independent four-mallet marimba performance based on the Musser grip. He was childhood friends with Max Weinberg, member of E Street Band and former band leader for The Tonight Show with Conan O'Brien

Leigh Howard Stevens (LHS) studied under some of the most prominent percussion teachers and performers of his time, including jazz drummer Joe Morello, and marimbist Vida Chenoweth, with whom he studied in New Zealand the summer after his freshman year of college. LHS pursued his college studies at the Eastman School of Music planning to be a drum set player. Stevens recalls, "I noticed when I got to Eastman that the techniques I was using--the one-handed roll, rotary strokes, doing Baroque trills with one hand, two-part Bach inventions, things like that--got a lot of attention. Other people seemed to think that I had a lot of talent on the marimba. I gradually began to realize that I had the potential of being a much better marimba player than I had of becoming a world-class drum set player." [1] Stevens' promptly switched to concert percussion, studied with John Beck and received a Performer's Certificate.

Method of Movement for Marimba

During the 1970s, LHS began writing down his thoughts and exercises he invented in order to facilitate the mastery of this new technique. The result was his pedagogical treatise Method of Movement for Marimba, first published in 1979 by his own company, Marimba Productions. Now in its 6th edition, Method of Movement for Marimba is widely considered a revolutionary and highly detailed textbook which describes Stevens' method for holding marimba mallets, efficient utilization of motion, and includes over 500 musical exercises for the student. Method of Movement (often shortened to MOM) was the first textbook to fully describe a complete method for holding and playing with 4 mallets. LHS came up with the technique after learning several other grips and considers his technique an outgrowth of the Musser grip. The Stevens technique is defined by a vertical hand position (in contrast to the previous flat-palmed Musser player), pivoting around either unused mallet (instead of lifting the unused mallet out of the way), and moving the end of the inside mallet through the palm for larger intervals.

Single Independent Strokes: the ability to strike single (or repeated single) strokes without moving the unused mallet held in that hand.

Single Alternating Strokes: executed as if they were alternating single independent strokes, these strokes consist of discrete, side to side rockings of the hand.

Double Vertical Strokes: a stroke that produces two pitches simultaneously. (It is somewhat of "double stop" with one hand).

Double Lateral Strokes: single motions that produce two successive pitches. It begins as a double vertical stroke but goes through a split second metamorphosis where one mallet strikes before the other.[2]

Stevens' performance at the first PASIC (Percussive Arts Society International Convention) in Rochester, New York in 1976 was a seminal event for all in attendance. For the first time, many percussion performers and teachers were seeing someone performing with a quasi-Musser grip but with an unprecedented degree of flexibility. Stevens was not attempting to revolutionize the percussion world; rather, he was merely performing in what he thought was a natural method for the marimba.

It would be difficult to overstate how different the attitudes and assumptions about four-mallet marimba playing were at the time that MOM was written. Since I had been doing an independent roll from the moment I began playing xylophone in 1969, I personally had no appreciation of how "revolutionary" the technique was, but as late as 1976, when I performed at the first Percussive Arts Society International Convention, most percussionists were seeing the independent roll, my "vertical Musser grip", rotary-based strokes and my extended-length birch handles for the first time.

LHS continues to be an active performer and clinician worldwide and has appeared at a dozen Percussive Arts Society International Conventions (PASIC) since 1976, and served as Professor of Marimba at the Royal Academy of Music in London, England from 1997-2004. From 1980 to the present, he has held a three-week Summer Marimba Seminar in Ocean Grove, NJ where an average of 30 students from around the world come participate in an intensive study of music and the Stevens technique with LHS himself.

Stevens started his own publishing company, Marimba Productions, in 1979 because he could not find a publishing company for his MOM manuscript. Still in business today, Marimba Productions Inc. comprises Malletech instruments and mallets, Keyboard Percussion Publications, and Resonator Records. Marimba Productions Inc. also includes acquisitions: Music Project, M.Baker Publications, Percussion Arts and Studio 4 Music. All of these companies are found on his website, MostlyMarimba.com [1]. LHS is the president and CEO of the company which operates out of a 20,000 square foot (Expression error: Missing operand for * ) building in Neptune, New Jersey.

Major pieces written for or commissioned by Leigh Howard Stevens

Reflections on the Nature of Water 1

Concerto for Orchestra and Marimba

Concerto for Marimba and Percussion Ensemble

Movement for Marimba and Harpsichord

Duo Concertante (for marimba and violin)

Atamasco and the Wooden Shalter2 (for Synthesized Tape and Amplified Marimba)

1 commissioned by a consortium of William Moersch, Gordon Stout, and Stevens

This article uses material from the article Leigh Howard Stevens from the free encyclopedia Wikipedia and it is licensed under the GNU Free Documentation License.