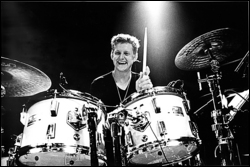 Jim Black (born 1967 in Seattle, Washington) is a jazz drummer who has performed with Tim Berne and Dave Douglas, among others. He attended Berklee College of Music.

His own group AlasNoAxis includes Hilmar Jensson on electric guitar, Chris Speed on tenor saxophone and clarinet, and Skúli Sverrisson on electric bass. The music is in some ways closer to post-rock than jazz, concentrating on rhythmic shifts and ensemble texture rather than featured solos. Since 2000, the group has released several records on Winter & Winter.

The group Pachora, also including Black, Speed, and Sverrisson, and with Brad Shepik on tambura and electric saz, plays music that is similarly rhythmically diverse, but inspired by Balkan rhythms.

Jim participated as drummer 12 in the Boredoms 77 Boadrum performance which occurred on July 7, 2007, at the Empire-Fulton Ferry State Park in Brooklyn, New York.

This article uses material from the article Jim Black from the free encyclopedia Wikipedia and it is licensed under the GNU Free Documentation License.