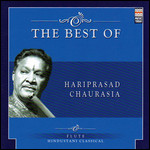 Hariprasad Chaurasia was born in Allahabad in the Indian state of Uttar Pradesh.[2] His father was a wrestler. His mother died when he was 6. He had to learn music without his father's knowledge, for his father wanted him to become a wrestler. He did go to the Akhada and train with his father for some time, although he also started learning music and practising at his friend's house. He often credits his wrestling training for giving him the immense stamina and lung power that are the hallmarks of his flute playing, stating that,

Hariprasad Chaurasia started learning vocal music from his neighbor, Pandit Rajaram, at the age of 15. Later, he switched to playing the flute under the tutelage of Pandit Bholanath Prasanna of Varanasi for eight years. He joined the All India Radio, Cuttack, Odisha in 1957 and worked as a composer and performer.[3][4] Much later, while working for All India Radio, he received guidance from the reclusive Annapurna Devi, daughter of Baba Allaudin Khan. She only agreed to teach him if he switched from right-handed to left-handed playing (so as to start over free from any pre-existing errement). Another version is that she only agreed to teach him after he (of his own) took the decision to switch from right-handed to left-handed playing to show her his commitment.[5] In any case Hariprasad Chaurasia plays left-handed to this day.

Apart from classical music, he has made a mark as a music director for Indian films along with Shivkumar Sharma, forming a group called Shiv-Hari. He has collaborated with world musicians in experimental cross-cultural performances, including the fusion group Shakti.

He serves as the artistic director of the World Music Department at the Rotterdam Music Conservatory in the Netherlands. He was also the founder of the Vrindavan Gurukul in Mumbai (opened 2006) and Vrindavan Gurukul in Bhubaneshwar (opened 2010). Both of these institutes are schools dedicated to training students in Hindustani Bansuri in the Guru-shishya tradition. As a Guru, he has produced many noted disciples including his nephew Rakesh Chaurasia, Rupak Kulkarni, Vivek Sonar, Sameer Rao, Jay Gandhi, Santosh Sant and Himanshu Nanda.[6]

He has collaborated with several western musicians, including John McLaughlin, Jan Garbarek, and Ken Lauber, and has composed music for Indian films. He has performed throughout the world, winning acclaim from varied audiences and fellow musicians including Yehudi Menuhin and Jean-Pierre Rampal.

Chaurasia was married to Kamla and Anuradha.[7] He has three sons Vinay, Ajay and Rajiv.[8]

The 2013 documentary film Bansuri Guru features the life and legacy of Chaurasia and was directed by the musician's son Rajeev Chaurasia and produced by the Films Division, Ministry of Information and Broadcasting, Government of India.[9][10]

These are major albums released by Pandit Hariprasad Chaurasia, categorized by release dates.2

Along with Pandit Shivkumar Sharma he composed music for

The music for the movie Sirivennela is composed by K. V. Mahadevan which revolves around the role of Pandit Hari Prasad, a blind flautist played by Sarvadaman Banerjee and flute renditions by Hariprasad Chaurasia.[17]

Some of his music is used in Mithaq Kazimi's 16 Days in Afghanistan.

This article uses material from the article Hariprasad Chaurasia from the free encyclopedia Wikipedia and it is licensed under the GNU Free Documentation License.