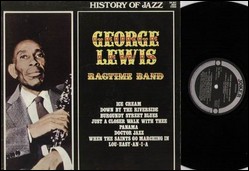 George Lewis (July 13, 1900 – December 31, 1968[1]) was an American jazz clarinetist who achieved his greatest fame and influence in the later decades of his life.

Lewis was born Joseph Louis Francois Zenon in the French Quarter of New Orleans, Louisiana. Lewis' great-great grandmother by his mother, Alice Zeno, was a Senegalese slave who was brought over to Louisiana around 1803. Zeno's family retained some knowledge of Senegalese language and customs until Alice's generation.[2]

Lewis was playing clarinet professionally by 1917, at the age of seventeen, working with Buddy Petit and Chris Kelly regularly as well as the trombonist Kid Ory and other leaders. At this time, he seldom traveled far from the greater New Orleans area. During the Great Depression he took a job as a stevedore, continuing to take as many music jobs after hours as he could find, a schedule that often meant he got very little sleep.

In 1942, when a group of New Orleans jazz enthusiasts, including jazz historian Bill Russell, went to New Orleans to record the older trumpeter Bunk Johnson, Johnson chose Lewis as his clarinetist. Previously almost unknown outside of New Orleans, Lewis was soon asked to make his first recordings as a leader on American Music Records, a label created by Russell to document the music of older New Orleans jazz musicians and bands.

Although purists, such as folklorist/musicologist Alan Lomax and others, touted Lewis as an exemplar of what jazz had been before it became overly commercialized by the popular swing bands of the late 1930s and early 1940s, Lewis was no "dinosaur," in Gary Giddins' words. When Lomax brought Lewis on a Rudi Blesh's radio show in 1942, he played the solo from clarinetist Woody Herman's then-recent hit, "Woodchopper's Ball", but his hosts had no idea that Lewis was applying his distinctive style to one of the latest hot tunes.[3]

In 1944 Lewis was injured seriously while working on the docks. A heavy container nearly crushed his chest, and for a time it was feared he would never play again. Against all odds, however, Lewis began practicing while convalescing in bed at his Burgundy Street home in the French Quarter. His friends, banjo player Lawrence Marrero and string bass player Alcide "Slow Drag" Pavageau, brought their instruments to Lewis's bedside. Bill Russell brought his portable recorder, and they recorded, among other things, an improvised blues that was to become Lewis' signature piece, christened "Burgundy Street Blues" by Russell. The performance interpolated a number of phrases and ideas that can be found in Louis Armstrong's playing, in particular his Hot Five recording of the Kid Ory composition "Savoy Blues." These blues figurations were perhaps just "in the air" around New Orleans in the early days, but it is also true that Armstrong's records were popular in New Orleans just as they were in the rest of the country.

As he recorded Lewis, Russell occasionally retitled some of his interpretations of pop tunes, for example, "New Orleans Hula" for "Hula Lou". These changes may sometimes have been made for copyright reasons, but occasionally it was simply because the musicians reported the titles inaccurately to Russell.

Lewis stayed with Bunk Johnson's newly popular band through 1946. This included a trip to New York City, where they played for dancing at the Stuyvesant Casino on Second Avenue. At this time, the band members included Johnson, Lewis, Marrero, Pavageau, trombonist Jim Robinson, pianist Alton Purnell, and drummer Baby Dodds. While in New York, they recorded for the Decca and Victor labels.

Starting in 1949 Lewis was a regular at the French Quarter's Bourbon Street entertainment clubs and had regular broadcasts over radio station WDSU. The Lewis band was featured in the June 6, 1950 issue of Look magazine, which was circulated internationally. The article was accompanied by photographs taken of the band by Stanley Kubrick.

National touring soon followed, and Lewis became a symbol of the New Orleans jazz tradition. Traveling ever more widely, he often told his audiences that his touring band was "the last of the real New Orleans jazz bands."

In the late 1940s and early 1950s his recordings reached the UK and strongly influenced clarinetists Monty Sunshine and Acker Bilk. They later became important contributors to the traditional jazz scene in the UK and accompanied Lewis when he later toured the country.

In 1952 Lewis took his band to San Francisco for a residency at the Hangover Club. That was followed by a tour around the United States. In the 1960s he repeatedly toured Europe and Japan and many young clarinetists around the world modeled their playing closely on his soulful style. While in New Orleans, he played regularly at Preservation Hall from its opening in 1961 until shortly before his death late in 1968. Paintings of him performing were painted by New Orleans artists and sitting portraits, notably those by Noel Rockmore, sold to collectors. A recording of his band by Atlantic Records, part of a series titled "Jazz at Preservation Hall," was like the others in the series actually recorded not at the Hall but at Cosimo Matassa's recording studio on Governor Nichols Street.

His music was extremely influential on a whole generation of British New Orleans jazz musicians, and many clarinettists based their style (at least initially) on Lewis's playing. He first visited Britain in 1957, playing across the country with Ken Colyer's Jazzmen. In 1959 he returned, this time with his full band, and received a warm response. British fans of the old New Orleans style were thrilled to see and hear in the flesh some of the old masters from the Crescent City. In 1959 he also visited Denmark and played in Odense.[4] In 1963, he led his band on a highly successful tour of Japan.

George Lewis is name-checked in the Bob Dylan song "High Water" from the album "Love and Theft".

Jazz author and critic Gary Giddins has described Lewis as "an affecting musician with a fat-boned sound but limited technique".[3]

This article uses material from the article George Lewis (clarinetist) from the free encyclopedia Wikipedia and it is licensed under the GNU Free Documentation License.