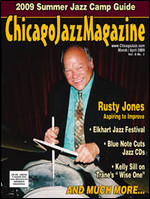 Isham Russell Jones II (born April 13, 1942), better known as Rusty Jones, is an American jazz drummer who is Chicago-based. Jones' father was a saxophonist and his mother a vocalist (appearing under the name of Gretchen Lee) with most of their gigs being in and around the Chicago area. His mother was working at the Bismark Hotel in 1936 when the two were wed. Other musicians in Jones' family were his grandfather, a trombonist/bandleader named Frank Jones, who worked in the Saginaw and Detroit area and Jones' mother's brother, Dean Herrick, an early artist on the Hammond organ.[1]

The most famous of these family musicians was Jones' great uncle, Isham Jones who became a renowned American bandleader/songwriter beginning with the 1920s and ending in 1936 when he initially retired. He wrote popular songs of the era such as, "It Had To Be You (song)", "I'll See You In My Dreams", "The One I Love Belongs To Somebody Else", "Swingin' Down The Lane", "On The Alamo", "There Is No Greater Love", "We're In The Army Now" and several others.[1][2]

Jones began playing drums at the age of thirteen and continued on throughout his college years, choosing traditional and modern jazz as his preferred mode of music. He went "on the road" after graduating college in 1965 from the University of Iowa with a degree in history and political science, to "get it out of his system", but he never stopped his pursuit of a musical vocation. He moved to the Chicago area in 1967.[1]

This article uses material from the article Rusty Jones (musician) from the free encyclopedia Wikipedia and it is licensed under the GNU Free Documentation License.