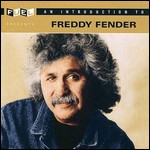 Freddy Fender (June 4, 1937 October 14, 2006), born Baldemar Garza Huerta in San Benito, Texas, United States, was a Mexican-American Tejano, country and rock and roll musician, known for his work as a solo artist and in the groups Los Super Seven and the Texas Tornados. He is best known for his 1975 hits "Before the Next Teardrop Falls" and the subsequent remake of his own "Wasted Days and Wasted Nights".

Born to Texas-born Margarita Garza and her Mexican-immigrant husband Serapio Huerta, Fender made his first radio appearance at age 10 on Harlingen's KGBT-AM radio station, when he sang a then-current hit, "Paloma Querida."[1]

Fender quit school at 16 in 1953, and when he turned 17 he enlisted for three years in the United States Marine Corps.[1] He served time in the brig on several occasions because of his drinking, and he was court-martialed in August 1956 and was discharged with rank of Private (E-1). According to Fender, he later received a letter from the United States Department of the Navy saying that he had been wrongfully discharged dishonorably because of alcoholism, and he was given a general discharge.[1] He returned to Texas and played nightclubs, bars, and honky-tonks throughout the south, mostly to Latino audiences. In 1957, then known as El Bebop Kid, he released two songs to moderate success in Mexico and South America: Spanish-language versions of Elvis Presley's "Don't Be Cruel" (as "No Seas Cruel") and Harry Belafonte's "Jamaica Farewell." He also recorded his own Spanish version of Hank Williams's "Cold Cold Heart" under the title "Tu Frio Corazon".

He became known for his rockabilly music and his cool persona as Eddie Con Los Shades. In 1958, he legally changed his name from Baldemar Huerta to Freddy Fender. He took Fender from the guitar and amplifier, and Freddy because the alliteration sounded good and would "...sell better with Gringos!"[2] He then went to California.

In 1959, Fender recorded the blues ballad "Wasted Days and Wasted Nights". The song was a hit, but he was beset by legal troubles in May 1960 after he and a band member were arrested for possession of marijuana in Baton Rouge, Louisiana. After serving nearly three years in the Angola prison farm, he was released through the intercession of then Governor Jimmie Davis, also a songwriter and musician. Davis requested that Fender stay away from music while on probation as a condition of his release. However, in a 1990 NPR interview on Fresh Air with Terry Gross (rebroadcast October 17, 2006[3]), Fender said that the condition for parole was to stay away from places that served alcohol.

By the end of the 1960s, Fender was back in Texas working as a mechanic, and attending a local junior college, while only playing music on the weekends.

Number one on pop and country charts

In 1974, Fender recorded "Before the Next Teardrop Falls". The single was selected for national distribution and became a number one hit on the Billboard Country and Pop charts. It sold over one million copies, and was awarded a gold disc by the R.I.A.A. in May 1975.[4] His next three singles, "Secret Love", "You'll Lose a Good Thing" and a remake of "Wasted Days and Wasted Nights", all reached number-one on the Billboard Country charts. Between 1975 and 1983, Fender charted 21 country hits, including "Since I Met You Baby", "Vaya con Dios", "Livin' It Down", and "The Rains Came". "Wasted Days and Wasted Nights" became Fender's second million-selling single, with the gold disc presentation taking place in September 1975.[4]

While notable for his genre-crossing appeal, several of Fender's hits featured verses or choruses in Spanish. Bilingual songs seldom hit the pop charts, and when they did it was because of novelty. Bilingual songs reaching the country charts was even more unusual.

Fender was heavily influenced by the swamp pop sound from southern Louisiana and southeast Texas, as is shown by his recording swamp pop standards on his 1978 album Swamp Gold. One of his major hits, "Wasted Days and Wasted Nights", has a typical swamp pop ballad arrangement. Fender associated with swamp pop musicians like Paul C. Saenz, Joe Barry and Rod Bernard, and issued many recordings on labels owned by Huey Meaux, a Cajun who specialized in swamp pop. As music writer John Broven observed, "Although Freddy was a Chicano from Texas marketed as a country artist, much of his formative career was spent in South Louisiana; spiritually Fender's music was from the Louisiana swamps."[5]

In 1989, Fender teamed up with fellow Tex-Mex musicians Doug Sahm, Flaco Jiménez, and Augie Meyers to form the Texas Tornados, whose work meshed conjunto, Tejano, R&B, country, and blues to wide acclaim. The group released four albums and won a Grammy in 1990 for Best Mexican American Performance for the track "Soy de San Luis." Fender described the group as such: "You've heard of New Kids on the Block? Well, we're the Old Guys in the Street". Following the death of Sahm, the Tornados' production slowed. A live 1990 appearance on TV's Austin City Limits, one of three the group made, was released in 2005 as part of the Live From Austin, Texas series.[6]

In 2001, Fender made his final studio recording, a collection of classic Mexican boleros titled La Música de Baldemar Huerta that brought him a third Grammy award, this time in the category of Latin Pop Album. Rose Reyes, who worked with Fender in 2004 for a Texas Folklife and Austin tribute titled "Fifty Years of Freddy Fender", said of the album, "When he did Mexican standards at that point in his career, I expected it to be good because he's a perfectionist. But that record is so beautifully recorded; his voice is perfection. I was so proud it was coming back to his roots."[6]

On March 13, 2001 Freddy Fender was erroneously reported to be dead by Billboard Magazine. He laughed off the magazine's error.[7] He underwent a kidney transplant in 2002 with a kidney donated by his daughter and underwent a liver transplant in 2004. Nonetheless, his condition continued to worsen. He was suffering from an "incurable cancer" in which he had tumors on his lungs. On December 31, 2005, Fender performed his last concert and resumed chemotherapy.

He died in 2006 at the age of 69 of lung cancer at his home in Corpus Christi, Texas, with his family at his bedside. He was buried in his hometown of San Benito.

International news coverage of the death cited an oft-expressed wish by the singer to become the first Mexican-American inducted into the Country Music Hall of Fame, with reporters noting that posthumous induction remains a possibility.

A Freddy Fender Museum and The Conjunto Music Museum opened November 17, 2007, in San Benito. They share a building with The San Benito Historical Museum. His family is committed to continue the Freddy Fender Scholarship Fund and other philanthropic causes which the musician was passionate about.

The song "Dead Man's Curve" from the album NonStopErotik by Black Francis is about Freddy Fender. [8]

In 1988, Fender played the mayor of a small New Mexico town in the Robert Redford-directed film The Milagro Beanfield War. Fender also appeared as "Tony" in the prison movie Short Eyes, a 1977 film adaptation, directed by Robert M. Young, of the Miguel Pinero play.

This article uses material from the article Freddy Fender from the free encyclopedia Wikipedia and it is licensed under the GNU Free Documentation License.