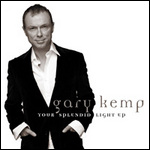 Gary James Kemp[1][2] (born 16 October 1959) is a British pop musician and actor who is the guitar player and chief songwriter for the 1980s new wave band Spandau Ballet. His brother Martin Kemp plays bass guitar in the band. Gary Kemp also provided backing vocals on many of the band's tracks, behind lead singer Tony Hadley.

Kemp was born to parents Eileen and Frank Kemp in St Bartholomew's Hospital,[3] Smithfield, London, and grew up in Islington, London, in a working-class family. He attended Rotherfield Junior School and Dame Alice Owen's school in Potters Bar. He was active in the Anna Scher Children's Theatre drama club,[4] along with his brother Martin. He began appearing in TV and film in 1968, including a role in the 1972 film Hide & Seek, alongside Roy Dotrice.[4]

Kemp eventually decided to concentrate on a career in music,[4] and in the late 1970s, he formed a band called The Cut with school friends.[5] The band became the Makers and the Gentry, and was eventually renamed Spandau Ballet.[5]

After recording Spandau Ballet's final album Heart Like a Sky, Kemp and his brother returned to acting. He earned criticism from his fellow band members Tony Hadley, Steve Norman and John Keeble, but received good reviews for his performance as Ronnie Kray in The Krays (1990).[6] The success of this film was the death-knell for Spandau Ballet.

In 1999, Hadley, Norman and Keeble attempted to sue Kemp for alleged unpaid royalties.[7] They claimed that an agreement had existed between him and the rest of the band, whereby Kemp, who was the main songwriter in the band, would pay his bandmates a share of the royalties earned. The claims were vigorously denied by Kemp; Hadley, Norman and Keeble subsequently lost their court case.[8] Although initially vowing to appeal the verdict, they later decided against this.[9]

Kemp made an attempt to reform Spandau Ballet in 2004. In early 2009, newspaper reports claimed that the band was set to reform later that year.[10][11][12] The rumours were confirmed by the band at a press conference held on board HMS Belfast in London on 25 March 2009. In 2012, Kemp's songwriting for Spandau Ballet was recognised with an Ivor Novello Award for Outstanding Song Collection.[13]

Kemp released a solo album entitled Little Bruises in 1995, followed by a tour of the UK and Ireland. He has written songs with a number of other writers for other artists, although few of them have actually been recorded and released. Two of his songs appeared on the debut album by American soap star Jacob Young in 2001.[14] Since 1995, Kemp has continued acting, taking the role of Serge in the West End production of Art in 2001, film roles in Dog Eat Dog, Poppies and American Daylight, and TV roles in Murder in Mind, Murder Investigation Team, and Casualty.

Kemp wrote music and additional lyrics with Guy Pratt for the musical production Bedbug, which was performed in a variety of venues during the Shell Connections Youth Drama Festival in 2004, and has written a musical, also with Pratt, entitled A Terrible Beauty, based on the life of W. B. Yeats and Maud Gonne.[15]

In January 2008, Kemp appeared on a celebrity special of Who Wants to Be a Millionaire? with his brother Martin, to raise awareness of and funds for the Encephalitis Society. In March 2008, Kemp starred in a low-budget 20-minute short film directed by his brother Martin, entitled Karma Magnet.[16] This was only released on the internet.

On 28 March 2011, Kemp lent his support to the British Music Experience charity, by holding an "in conversation" session with an audience of 80 people.[17] During a 90-minute interview, he performed several songs acoustically, including #1 hit "True" and #2 hit "Gold". He also entertained questions from the audience, revealing that two of the songs he would like to have written were "Shipbuilding" and "Alison" by Elvis Costello.

Since 2012, Kemp has been the Chair of the 400th Anniversary Celebration Committee of his former school, Dame Alice Owen's.[18][19]

Kemp is scheduled to perform as part of Nick Mason's Saucerful of Secrets in London in May 2018, who are set to perform a selection of early Pink Floyd material.[20]

Kemp is an atheist,[22][23] and a staunch supporter of the Labour Party. He made a guest appearance in Red Wedge in the 1980s.[24] Kemp is also a keen lifelong collector of the furniture produced by Edward William Godwin.[25]

Kemp has released an autobiography:

This article uses material from the article Gary Kemp from the free encyclopedia Wikipedia and it is licensed under the GNU Free Documentation License.