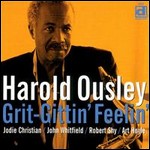 Ousley began playing in the late 1940s, and in the 1950s recorded behind vocalists such as Billie Holiday and Dinah Washington. He played as a sideman with Gene Ammons in the 1950s and with Jack McDuff and George Benson in the 1960s.[1] He released his first record as a leader in 1961. In the 1970s he played with Lionel Hampton and Count Basie in addition to releasing further material as a leader. After 1977 he did not release another album under his own name until his most recent effort, 2000's Grit-Grittin' Feelin'.[1]

This article uses material from the article Harold Ousley from the free encyclopedia Wikipedia and it is licensed under the GNU Free Documentation License.

Camille Saint-Saëns Introduction/Rondo Capric.Op.28
Update Required To play the media you will need to either update your browser to a recent version or update your Flash plugin.