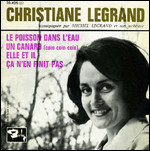 Legrand was born in Paris. Her father Raymond Legrand was a conductor and composer renowned for hits such as Irma la douce, and her mother was Marcelle Der Mikaëlian (sister of conductor Jacques Hélian), who married Legrand Senior in 1929. His maternal grandfather was of Armenian descent and considered a member of the bourgeoisie.[1] Legrand studied piano and classical music from the time she was four. Jazz critic and composer André Hodeir discovered her in 1957, and she became the lead singer in the most notable French jazz vocal groups of the 1960s, including Les Double Six.

Legrand was the original lead soprano of The Swingle Singers and was the vocalist who dubbed the part of Madame Emery in Les parapluies de Cherbourg, the music for which was composed by her brother Michel Legrand. She also sang the part of Judith in his Les demoiselles de Rochefort. Her commercial recordings of music for the concert hall included a recording of Laborinthus II of Luciano Berio.[2]

Legrand did the French dubbing for the title role of Disney's film Mary Poppins (1964) and lent her talents to numerous other film projects. Legrand was the featured soprano on the track "Fires (Which Burn Brightly)" on the 1973 Procol Harum album Grand Hotel.

Her niece Victoria Legrand is a member of the American indie rock group Beach House.

This article uses material from the article Christiane Legrand from the free encyclopedia Wikipedia and it is licensed under the GNU Free Documentation License.