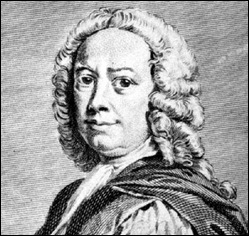 Johann Christoph Pepusch (1667 20 July 1752), also known as John Christopher Pepusch and Dr Pepusch, was a German-born composer who spent most of his working life in England.

Pepusch was born in Berlin. At the age of 14, he was appointed to the Prussian court. About 1700, he settled in England where he was one of the founders, in 1710, of The Academy of Vocal Music, which in 1726 was renamed The Academy of Ancient Music. In Joseph Doane's Musical directory for the year 1794, the founding of the Academy is discussed; on page 76, Doane states that:[1]

In the year 1710 (memorable for Handels first appearance among us) a number of the most eminent composers and performers in London [agreed] to concert a plan of an Academy for the study and practice of Vocal and Instrumental Music, which was no sooner announced than it met the countenance and support of the principal persons of rank. Among the foremost in this undertaking were Mr. John Christopher Pepusch, Mr. John Earnest Galleard, an excellent composer and performer on the Oboe, Mr. Bernard Gates of the Queens Chapel, Henry Niedler, etc.

Pepusch remained Director of the Academy until his death in 1752, whereupon he was succeeded by Benjamin Cooke. Pepusch died in London.

During a period of twenty years, Pepusch directed the musical establishment at Cannons, a large house northwest of London. For a couple of years he worked alongside George Frideric Handel - in 1717/18 both men were employed there by James Brydges, 1st Duke of Chandos. (For more see Baker and Baker, ref. below)

Although Pepusch is now best known for his arrangement of the music for The Beggar's Opera (1728) -- to the libretto of John Gayhe composed many other works including stage and church music as well as concertos and continuo sonatas.

This article uses material from the article Johann Christoph Pepusch from the free encyclopedia Wikipedia and it is licensed under the GNU Free Documentation License.