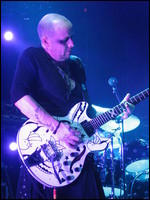 Pearl Thompson (born Paul Stephen Thompson 8 November 1957 in Surrey), previously known as Porl Thompson, is an English musician best known for her work with The Cure.

Thompson was part of the original lineup of The Cure, which also included Robert Smith, Michael Dempsey, and Lol Tolhurst when the band was first formed in 1976; however, she left by the time they released their debut album, Three Imaginary Boys, in 1979 because she went to college for art.[1] she rejoined the band in 1983 on saxophone and helped record the album The Top. During the Top tour, Thompson played keyboard as well as the guitar, bass and saxophone. She also performed with The Glove when they appeared on television.[2]

Thompson performed on four more studio albums (The Head on the Door, Kiss Me, Kiss Me, Kiss Me, Disintegration and Wish) and four live albums (Concert, Entreat, Paris and Show) as well as the videos The Cure in Orange and Picture Show . She also appears on the remix album Mixed Up and the deluxe issue of Three Imaginary Boys.

Thompson left the Cure in 1994 to play with Jimmy Page and Robert Plant of Led Zeppelin during the Page and Plant tour of 1995. She also played with Babacar, the band formed by Boris Williams following his departure from The Cure. Later Thompson formed another project called Quietly Torn.

Thompson continued working with Robert Plant again when she joined the singer's group for the 2002 release Dreamland.

She officially rejoined the band for a third time in June 2005 and recorded the live DVD, The Cure: Festival 2005 and appeared on their 13th studio album, 4:13 Dream.

Thompson and designer Andy Vella are the co-founders of Parched Art, which has produced many of the record sleeves found on The Cure albums, many of which Thompson drew or painted.

In 2013, now known as Pearl Thompson, she collaborated with Gonjasufi, other various artistic projects and charities such as WAR CHILD that Thompson, along with other renown artists donated their own custom made Caparelli guitar for auction.

In March 2015, Pearl had her first US painting exhibition of abstract landscape paintings at Mr MusicHead Art Gallery on Sunset Boulevard in Los Angeles, California entitled: "...Through the eyes of birds." inspired by the remote Malibu canyons and desert landscapes.

Pearl is also heavily featured on the album Callus by Gonjasufi released in August 2016 by Warp Records.

Thompson is noted as being reclusive and private about her personal life and is primarily now dedicated to painting.

This article uses material from the article Porl Thompson from the free encyclopedia Wikipedia and it is licensed under the GNU Free Documentation License.