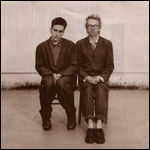 Hall was raised in Coventry, England in a family with Jewish ancestry. Leaving school before his fifteenth birthday and then taking various short-term jobs - bricklayer and apprentice hairdresser among them[2] - he became an active member of the burgeoning Coventry music scene of the late 1970s, playing in a local punk band called Squad and being credited as a composer on their "Red Alert" single.

As the frontman for The Specials, Hall first came to prominence in the UK in 1979 when BBC Radio 1 DJ John Peel played their debut single "Gangsters" on his show. The band then went on to release their debut album, Specials, which also contained the hits "A Message To You Rudy" and a slower version of "Too Much Too Young."

In October 1980, The Specials released their second album, More Specials, which boasted two more hit singles with "Do Nothing" and "Stereotype."

The single "Ghost Town", released in June 1981, spent three weeks at number one and ten weeks in the top 40 of the UK Singles Chart. The b-side song, "Friday Night Saturday Morning", penned by Terry Hall, described a night out at the Coventry Locarno.[3]

After the last Specials single, "Ghost Town," was released, Hall left the band to start a new group called Fun Boy Three with two of his Specials bandmates, Lynval Golding and Neville Staple.[1] The Fun Boy Three's first hit single, "The Lunatics (Have Taken Over The Asylum)," was released in 1981 and was followed-up in 1982 with "It Ain't What You Do (It's the Way That You Do It)," a duet with Bananarama. Fun Boy Three then provided guest vocals for Bananarama's single, "Really Saying Something." That same year, Hall and his bandmates appeared in the music video for "Driving in My Car" by Madness and released their debut album, Fun Boy Three, which reached #7 in the UK Albums Chart.[1] In February 1983, Fun Boy Three released their second album, Waiting, which contained two Top Ten hits: "The Tunnel of Love" and "Our Lips Are Sealed." The latter was a song Hall had written with Jane Wiedlin, who had already had success in the United States with her group The Go-Go's.

In 1984, Hall formed The Colourfield, releasing the album Virgins & Philistines in 1985, which included the hit single "Thinking of You." The album spent seven weeks in the UK chart, peaking at #12.[1] This new musical direction would culminate in collaborations with Ian Broudie and Hall contributing a number of songs to Broudie's albums as The Lightning Seeds. Hall also co-wrote the song "Smoke Ring" for Broudie's debut solo album Tales Told, which was also released as the lead track on the Smoke Rings EP. A second Colourfield album, Deception, was released in 1987, reaching #95 in the UK Albums Chart.[1]

In 1989, Hall teamed up with American actress Blair Booth and jeweler Anouchka Groce and began recording under the moniker of Terry, Blair & Anouchka. After two singles, the trio released Ultra Modern Nursery Rhymes, which failed to chart.[1]

In 1992, Terry joined forces with Dave Stewart, most famous for his role as one half of the Eurythmics. The duo took on the name Vegas and released Vegas, a slick electronic pop album that was heavily promoted by their label BMG. It failed to chart. Only one of the three singles lifted from the album, "Possessed," managed to break the UK Top 40, reaching #32.[1]

Hall began his formal solo career in 1994 with Home. The album was produced by his former collaborator Ian Broudie. The following year, Hall released the single "Rainbows" in collaboration with Damon Albarn of Blur, but like the other singles lifted from the album, it failed to make much impression on the chart.

In 1997, Hall followed up his début album with Laugh. It remains his most successful solo outing, making it to #50 in the UK Albums Chart.[1] Both albums featured long time collaborator Craig Gannon.

In 2003, Hall collaborated with Mushtaq of Fun-Da-Mental on the album The Hour of Two Lights which contains contributions from Blur's Damon Albarn, a twelve-year-old Lebanese girl singer, a blind Algerian rapper, a Syrian flautist, Hebrew vocalists and a group of Polish gypsies.

In 2001, Hall appeared as a guest on the Gorillaz & D12 collaboration single "911", which was a song about terrorist attacks in the US. Hall sings the chorus along with Gorillaz frontman Damon Albarn, while D12 rap their verses. In 2001, Hall guested on the song "Never Alone," which appeared on the Junkie XL album Radio JXL: A Broadcast from the Computer Hell Cabin.

In 2007, Hall provided vocals for many tracks on the Dub Pistols album Speakers and Tweeters and also appeared live at the Glastonbury Festival on the Pyramid Stage with Lily Allen and former Specials bandmate Lynval Golding. He also played on the Park Stage, once again with Golding and also Damon Albarn and beatboxer Shlomo, playing a version of The Specials' "A Message to You Rudy." Later that year, he appeared at GuilFest on the BBC 2 radio stage, once again with the Dub Pistols and Golding.

On 30 March 2008, Hall stated that The Specials would be reforming for tour dates and possibly some recording.[4][5]

On 6 September 2008, six members of the band performed on the Main Stage at Bestival as the "Surprise Act." The Specials' original keyboardist and primary composer Jerry Dammers did not play at the festival and owns the trademark rights to the name "The Specials," so the group was billed as "Very 'Special' Guests". On 2 December 2008, The Specials announced 2009 tour dates to celebrate their 30th anniversary. Jerry Dammers did not join the band on the tour, although relations between the two parties are strong. Hall was quoted as saying "the door remains open to him".[6]

This article uses material from the article Terry Hall (singer) from the free encyclopedia Wikipedia and it is licensed under the GNU Free Documentation License.

Alexander Dreyschock Nocturne G-Dur op. 102
Update Required To play the media you will need to either update your browser to a recent version or update your Flash plugin.