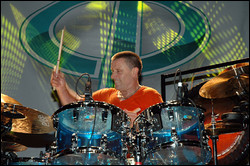 Carl Frederick Kendall Palmer (born 20 March 1950) is an English drummer and percussionist. He is credited as one of the most respected rock drummers to emerge from the 1960s.[1] In addition, Palmer is a veteran of a number of famous English bands, including the Crazy World of Arthur Brown; Atomic Rooster; Emerson, Lake & Palmer; and Asia. Palmer was inducted into the Modern Drummer Hall of Fame in 1989.[2] He was awarded "Prog God" at the 2017 Progressive Music Awards.[3]

Palmer began taking drum lessons as a young boy, travelling to Denman Street, Piccadilly. His first band, with others from the Midlands area, was originally known as the King Bees, but changed its name to the Craig. They made their first record, "I Must Be Mad", produced by Larry Page, in 1966; the flip side was "Suspense". At this time, Palmer also did his first session work, playing on the song "Love Light" by the Chants, a group from Liverpool. Later in 1966, he was then invited to join Chris Farlowe and the Thunderbirds.[4]

The Crazy World of Arthur Brown

Drachen Theaker was the original drummer for The Crazy World of Arthur Brown, founded by Arthur Brown, and played on the band's eponymous album, including the song Fire. Theaker abruptly left the band during a U.S. tour in 1969. Carl Palmer was quickly recruited as a replacement and became a permanent band member.[5]

Vincent Crane was the keyboard player with the Crazy World of Arthur Brown, and both he and Palmer left that group in the summer of 1969 to strike out musically on their own as Atomic Rooster, a trio formed with vocalist/bassist Nick Graham. There were several personnel changes in the band, and their first album was released in early 1970. Meanwhile, Palmer received a call from Keith Emerson to audition for a new group and left Atomic Rooster in the summer of 1970.

Palmer met up with two other young English musicians, Greg Lake, and Keith Emerson. Emerson had most recently been a member of the Nice, and Lake was in King Crimson, and both wanted to further expand their musical creativity. After auditioning several drummers, including Mitch Mitchell, they felt an "immediate chemistry" with Palmer, and by the summer of 1970 they had formed a band. In naming the new group, the trio chose their surname|last names alphabetically – Emerson, Lake & Palmer, also shortened to ELP. The band has been the most successful of his career, and he remained with ELP until they first disbanded in 1980. They developed a sound that merged art rock, jazz, electronica, pop rock and classical music and found fans within their peers and the public alike. During that time Palmer released only one single as a solo artist but went on to develop a solo career, alongside ELP and his other future bands. During the latter part of 1981, Palmer played drums on the Mike Oldfield album Five Miles Out, including the song "Mount Teide". Other recordings that Palmer did with Oldfield, such as "Ready Mix," remained unreleased until 2001. Emerson, Lake & Palmer subsequently reunited in the early 1990s and played the progressive rock circuit, especially in outdoor summer concerts. They also released two new studio albums. In 1998 the members of ELP had a rather acrimonious falling-out and Lake left the band. Following the deaths of Emerson in March 2016 and Lake in December 2016, Palmer is the only surviving member of Emerson, Lake & Palmer.

Following the first break-up of ELP in 1980, Palmer formed PM with Texas blues rock guitarist John Nitzinger for one album before joining John Wetton and Steve Howe in early 1981, who had been brought together to form a new super-group. They were later joined by Geoff Downes to form Asia. Palmer left Asia in 1991 to join the ELP reunion. After several personnel changes the four founder members of Asia including Palmer reunited in 2006.

The jazz trio Back Door toured with ELP circa 1974, and Palmer began to collaborate with them, producing their fourth album, Activate (1976). Two of the members of the group, saxophonist Ron Aspery and bassist Colin Hodgkinson, co-wrote the song Bullfrog with Palmer, also playing (uncredited) on the song, which appears on Works Volume 2.

Palmer rejoined the newly reformed ELP in 1992 for Black Moon, In the Hot Seat, a box set, as well as several DVDs and the subsequent tours. A one-off ELP performance at the 2010 High Voltage Festival celebrated the 40th anniversary of forming the band.

Following the 1998 break-up of ELP, Palmer worked with Asia's John Wetton in the band Qango, and subsequently toured with his 'Carl Palmer Band' featuring Shaun Baxter on guitar and Dave Marks on bass (replaced by Paul Bielatowicz and Stuart Clayton, later Simon Fitzpatrick). In addition to these tours, he has released four "new" albums, most notably Working Live Vol. I,II & III as well as an anthology album.

In recent years, Palmer has performed a series of drum clinics across the UK, Europe and United States. Highlights of Palmer's live drum solo over the years have included the use of both gongs and tambourines, and also his ability to extract himself from his T-shirt while playing complex double bass drum patterns; the latter leaving him stripped to the waist to play the final part of his show. The removal of his shirt was a major attraction in Palmer's drum solos during the 1970s, 1980s and 1990s. On recent tours, however, his shirt has remained on throughout his performances. Palmer is a patron of the British 'Classic Rock Society', which promotes Progressive Rock concerts.

In 2013, Palmer went on a world tour that included shows in South and North America, and Europe. For example, he played in Montevideo, Uruguay, for the first time on 7 April. The Palmer's tour band is a trio, with him on drums and percussion, guitarist Paul Bielatowicz and bassist Simon Fitzpatrick.

On 19 July 2013, it was announced that Carl Palmer will be appearing on the second annual Moody Blues Cruise,[6] 2–7 April 2014 on the cruise ship MSC Ship Divina. On that cruise he'll be presenting instrumental versions of many of ELP's hits.

Having played with a variety of bands, including various anonymous schoolboy bands as a youth, Palmer's style was developed from a wide range of musical influences. Among Palmer's early drumming influences were Joe Morello, Philly Joe Jones, Art Blakey, Gene Krupa and Buddy Rich.[1] Inspiration from their techniques can be heard in his own drumming style, which was initially influenced more from jazz than any other genre. Known for his technical prowess, another of Palmer's trademarks included solos in many of his performances. His later work in Asia saw a more basic approach, although he began to play double bass drums more frequently during that period, and was the eleventh drummer to be inducted into the Modern Drummer Hall of Fame.[10]

Carl was married to his first wife Maureen in the 1980s who gave birth to Carl's only child Carissa (who is now a lawyer). Palmer has been with a woman named Katie since 2004. Palmer lives in Cyprus and the UK.[11] Palmer is a lifelong non-smoker, who avoided drugs and beer and didn't drink alcohol until he was 22, and became vegan in the early 2010s.[12]

In 1973, Palmer commissioned British Steel to design a custom stainless steel drum kit using one-quarter-inch thick shells, the only off-the-shelf equipment were the hoops manufactured by Gretsch. He also had a jeweller engrave the shells with various animals. The kit, along with other percussion instruments and a rotating platform, had a total weight of approximately 2.5 tons and many of the stages on tour had to be reinforced, with some venues cancelling shows because of it. Also, the kit was electronically designed to be "synthesized" to sound like electronic drums.[14]

Palmer has endorsed Paiste since 1971 and currently uses this cymbal setup :

With Emerson, Lake and Palmer

This article uses material from the article Carl Palmer from the free encyclopedia Wikipedia and it is licensed under the GNU Free Documentation License.