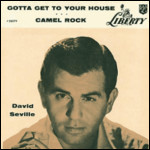 Not to be confused with Ross Bagdasarian, Jr..

Rostom Sipan "Ross" Bagdasarian (January 27, 1919 – January 16, 1972) was an American pianist, singer, songwriter, actor and record producer of Armenian descent. He was better known by the stage name David Seville. Bagdasarian was the creator of Alvin and the Chipmunks.

Bagdasarian was born in Fresno, California, the youngest child of Dick and Virginia (Saroyan) Bagdasarian, Armenian immigrants from the Ottoman Empire.[1] He enlisted in the United States Army one month after the Japanese attack on Pearl Harbor, and served until the end of World War II.

Bagdasarian performed in the Broadway cast of The Time of Your Life, written by his famous cousin, William Saroyan.[2] Bagdasarian's first musical success was the song he wrote with Saroyan, "Come on-a My House", recorded by Rosemary Clooney in 1951. The lyrics are based on dialogue from Saroyan's novel The Human Comedy. They wrote the song on the post-Broadway tour bus of The Time of Your Life in 1939, and recorded it under their own names as a duet (Saroyan speaking the narrative, Bagdasarian delivering the lyrics in dialect) for Coral Records. ("Come on-a My House" inspired an answer record, "Where's-a Your House?" by Robert Q. Lewis.)

Bagdasarian played minor roles in films, the best known of which is his appearance in Alfred Hitchcock's 1954 murder mystery Rear Window. Bagdasarian portrays a piano-playing songwriter who composes, plays, and sings the song "Lisa". His character lives in an apartment opposite the protagonist's; in keeping with the screenplay's theme of social voyeurism, his dialogue is never clearly heard, and he appears only in long shots, sometimes seen through a window. He stands next to Hitchcock in his signature cameo appearance. Bagdasarian had small parts in The Greatest Show on Earth, Viva Zapata!, Destination Gobi, Stalag 17, Alaska Seas, The Proud and Profane, Three Violent People, Hot Blood, The Deep Six, and The Devil's Hairpin.

In 1956, Bagdasarian had a moderate hit as "Alfi and Harry" with a novelty record "The Trouble with Harry", the same title as Alfred Hitchcock's comedy-thriller that year. He wrote The Ballad of Colin Black, a tie-in song to The Proud and Profane. According to Ross Bagdasarian, Jr., his father was down to his last $200 when he spent $190 on a V-M tape recorder that would let him vary the tape speed.[3] As David Seville, Bagdasarian had a number-one hit in the summer of 1958 with "Witch Doctor" which was his first experiment with speeding an audio track to get a distinctive, squeaky, high-pitched voice. He followed this with "The Bird on My Head", which barely made the Top 40. Then for the 1958 Christmas season came "The Chipmunk Song (Christmas Don't Be Late)" with The Chipmunks, for which he won two Grammy Awards in 1959: Best Comedy Performance and Best Recording for Children. Bagdasarian named the three Chipmunk characters after record executives: Simon Waronker, Ted Keep (Theodore), and Alvin Bennett.

Most consumer tape recorders of the day had changeable speeds, but usually only in simple binary multiples, doubling or halving the speed, creating sounds an octave apart. Changing speeds of voices in these limited multiples creates extremely high or low pitches that sound too extreme for most purposes. (Walt Disney used half-speed recording for his Chip 'n Dale cartoon characters, making the extremely fast dialogue difficult to understand. As a result, dialog recorded at that speed had to consist of very short phrases.) For his professional releases, Bagdasarian's main recording innovation was to use tape machines that could vary speeds in between these extreme octaves, creating more understandable and thus emotionally accessible voices that worked well for both singing and spoken dialogue.

The first Chipmunk record, "The Chipmunk Song", had Bagdasarian doing all the voices. (The spoken coda, when played slowly, reveals Bagdasarian enacting the roles of Theodore, Simon, and Alvin.) Despite claims that Bagdasarian employed female background singers and used less speed manipulation on later recordings, examination of recordings as late as the Canned Heat "Chipmunk Song" spoof in 1968 proves he was still performing the voices himself. Playing a 45 rpm record at 33 1/3 as some have recommended does not sufficiently lower the pitch; it must be played at one-half normal speed, either by transferring to tape or playing a 33 1/3 LP at the 16 2/3 speed still found on some older turntables. (The later Chipmunk records produced by his son do employ studio background singers, usually male; the Chipettes however are usually sung by female vocalists.)

After the success of "The Chipmunk Song", a series of follow-up hit singles were quickly released, also on Liberty Records. "Alvin's Harmonica" was the second, "Ragtime Cowboy Joe" the third and "Alvin's Orchestra" the fourth, with B-sides (like "Mediocre" and "Almost Good") sometimes featuring non-chipmunk semi-comedic concepts. Albums continued this trend, the first album being released on red vinyl, successfully continuing well into the 60s with an album of the Chipmunks singing various early hits of the Beatles in 1964. (Even a Chipmunk album of punk and new wave songs was released in the 1980s by Ross Jr.)

Other trick-recording producers tried to imitate Seville's Chipmunks, with usually embarrassing results for lack of good comedy writing and weak characterization. A failed novelty single by "Shirley and Squirrelly" is a good example. Wynecote Records attempted to cash in on both the Chipmunks and Beatlemania in 1964 with an LP dubbed A Hard Day's Night, and Others by the Four Chipmunks (SW-9037) but later were forced to change the artist credit to the more generic "Wynecote Squirrels".

Ray Stevens had somewhat better luck using similar speed-varying techniques on some of his novelty records, particularly his "Bridget the Midget" song from 1970 which hit the Top-5 in the United Kingdom in early 1971, as did Sheb Wooley with his "Purple People Eater" single in the late 1950s. Other novelty recording artists experimented with similar speed tricks—Buddy Holly recorded a Chipmunk-styled version of Little Richard's "Slippin' and Slidin'" for his own amusement, and his slow vocal was later released commercially—but none came close to the longevity of Bagdasarian's strongly-defined Chipmunk characters, Simon, Theodore, and the trouble-making Alvin.

Following his hit records, Bagdasarian provided the voice for the David Seville and Alvin in the Chipmunks' short-lived 1961-62 animated television series The Alvin Show.

The Chipmunks' recordings had the performers often labeled as "David Seville and the Chipmunks" and the composer typically listed as "Bagdasarian." Bagdasarian's last album was The Chipmunks Go to the Movies, released in 1969, almost three years before his death.

Ross Sr. was found dead of a heart attack[4] on January 16, 1972, eleven days before his 53rd birthday; he was cremated at the Chapel of the Pines Crematory in Los Angeles, California. His ashes were moved later by his son, Ross Bagdasarian, Jr.

All Chipmunk activity ceased until 1979, when Ross Jr began releasing Chipmunks recordings. He also became the voice for David Seville and the Chipmunks, except for those performed by Ross Jr.'s wife, Janice Karman, such as Theodore and all of The Chipettes.

Ross Jr. said he was surprised to find himself following in his father's footsteps. I revered my dad, but I didnt want to do what he had done. That was his creation. Had he remained alive, I never would have done this. But when he passed away suddenly, it was a way of keeping my dad alive, and keeping what he created alive."[4]

The 2007 film Alvin and the Chipmunks was dedicated to his memory. A title card shown in the middle of the end credits reads "This film is dedicated to Ross Bagdasarian Sr., who was crazy enough to invent three singing chipmunks nearly fifty years ago".

Discography (Without the Chipmunks)

Songs recorded under the name "Ross Bagdasarian", unless otherwise noted:

Songs recorded under the name "David Seville", unless otherwise noted. For a look at The Chipmunks' discography, refer to the Alvin and the Chipmunks discography page.

This article uses material from the article Ross Bagdasarian, Sr. from the free encyclopedia Wikipedia and it is licensed under the GNU Free Documentation License.