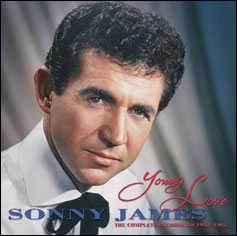 James Hugh Loden (born May 1, 1929), known professionally as Sonny James, is an American country music singer and songwriter best known for his 1957 hit, "Young Love". Dubbed the Southern Gentleman, James had 72 country and pop chart hits from 1953 to 1983, including a five-year streak of 16 straight among his 23 No. 1 hits. Twenty-one of his albums reached the country top ten from 1964 to 1976. He is a member of the Country Music Hall of Fame. James is currently retired and lives in Nashville, Tennessee.

James Hugh Loden was born to Archie Lee 'Pop' Loden and Della Burleson Loden,[1] who operated a 300 acres (121.4056926 ha) farm outside Hackleburg, Alabama. His parents were amateur musicians, and his sister Thelma Lee Loden Holcombe also played instruments and sang from an early age. By age three he was playing a mandolin and singing. In 1933 the family appeared on a radio audition which resulted in their being offered a regular Saturday slot on Muscle Shoals, Alabama radio station WMSD-AM. About this time the parents volunteered to raise an Alabama girl named Ruby Palmer, and soon Ruby was also part of the musical group, and the singing Loden Family, later billed as Sonny Loden and the Southerners, was soon playing theaters, auditoriums and schoolhouses throughout the Southern United States.

To this point the musical appearances had been a part-time effort for the family, as they returned after each gig or tour to work the family farm. After a few years the father decided they were professional enough to immerse themselves into the field full-time, so the father leased out the farm and they took a daily spot on radio station KLCN, where they provided early-morning accompaniment for the area's early-risers. After that they had spots on several other radio stations around the South. In 1949 they returned to Alabama, with a show on radio station WSGN in Birmingham, Alabama. Near Christmastime that year, the two girls were married in West Memphis, Arkansas in a double ceremony[1] and left the group. The parents found other girls to take their place, but the group soon fell apart (the parents returned to Hackleburg and opened a clothing store, where James worked while belatedly finishing his final year of high school).[1] During the summer of 1950 James worked with a band, sometimes singing but he was most useful as a guitar player[1] on the Memphis, Tennessee radio station WHBQ, but that was interrupted near the end of the summer when James' National Guard unit was activated to participate in the Korean War. On September 9, 1950 his Alabama Army National Guard unit was sent to Korea, returning home in the fall of 1951.[2] Loden was honorably discharged and moved to Nashville, Tennessee where he signed with Capitol Records with the help of Chet Atkins, with whom he had previously roomed.[1] The company asked him to drop his last name professionally as they believed there were already several musicians named Loden, Louden or Luden, and that "James" would be easier to remember: "The smallest children can remember Sonny James." [1] sohe released his first studio record as Sonny James.

While appearing on Louisiana Hayride he met musician Slim Whitman. James' performance on stage playing a fiddle and singing brought a strong crowd response, and Whitman invited him to front for his new touring band.[1] James stayed with Whitman's group for only two months as he felt uncomfortable playing in bars and areas full of smoke and alcohol, saying that his family had only appeared in schoolhouses and such.[1] Over the next few years, he had several songs that did reasonably well on the country music charts and he continued to develop his career with performances at live country music shows. He also appeared on radio, including Big D Jamboree, before moving to the all-important new medium, television, where he became a regular performer on ABC's Ozark Jubilee in Springfield, Missouri beginning in October 1955.[3]

Top of the charts

In late 1956 James released "Young Love", a 45 rpm single for which he would forever be remembered. As the first teenage country crossover single, it topped both the US country and pop music charts in January 1957. Record sales could have been higher if Capitol Records had anticipated the exposure on popular-music charts; they had ordered only enough copies of the record to satisfy the anticipated country-music demand, and were therefore unable to supply most of the requests for records.[1] The track peaked at No. 11 in the UK Singles Chart.[4] It sold over one million copies, and was awarded a gold disc.[5] Dubbed the Southern Gentleman because of his polite demeanor, he gained more exposure with an appearance on the popular Ed Sullivan Show. After leaving Capitol Records for the first time in 1959, James signed with National Recording Corporation. His career also included stints with Dot (1960-1961), RCA (1961-1962), his second stint with Capitol (1963-1972), Columbia (1972-1979), Monument (1979), and Dimension (1981-1983).

He went on to a long and highly successful career, and in 1962 he became a member of the Grand Ole Opry. From 1964 to 1972 he was a dominant force in country music. He was a guest on the Bob Hope Show and Hee Haw, and made minor appearances in several Hollywood motion pictures. In 1969 Billboard magazine named him Artist of the Year. In 1971, James made a special music recording for the crew of Apollo 14, who later presented him with one of the small American flags that they had carried to the Moon.[1]

Beginning in 1967 with "Need You" and ending with "Here Comes Honey Again" in 1971, James recorded 16 straight No. 1 country singles of his 72 verified chart hits. His career No. 1 one total was 23, the last coming with 1974's "Is It Wrong (For Loving You)". During this time James also helped launch the solo career of Marie Osmond, producing her first three albums, including the 1973 smash hit, "Paper Roses".

The No. 1 streak record, however, is a point of contention. Country supergroup Alabama surpassed James' record in 1985 with their 17th No. 1 song, "Forty Hour Week (For a Livin')", but the dispute stems from their 1982 Christmas single, "Christmas in Dixie". The song peaked at 35 on the Billboard Hot Country Singles chart in January 1983, during what could be considered a streak of 21 No. 1 songs. Some sources, such as Joel Whitburn's "Top Country Songs: 1944-2005," disregard non-No. 1 Christmas singles in determining chart-topping streaks, and consider Alabama to have surpassed the record; others, however, including the Alabama Music Hall of Fame, state that the failure of "Christmas in Dixie" snapped Alabama's streak before it could achieve parity with James' 16.

In 1983, James retired to his home with Doris in Nashville, Tennessee. He came home to Hackleburg during the Neighbor Day Festival on April 25, 2009 and recognized the 100th birthday of the town of Hackleburg on the main stage during the festival.

This article uses material from the article Sonny James from the free encyclopedia Wikipedia and it is licensed under the GNU Free Documentation License.